Some time back, G2 had a submersion accident. He was playing in shallow waters and he slipped into a deeper section where his head went under. He swallowed some water before he was pulled to safety by G1. Given his penchant for leaping into water with no consideration for his own safety, we decided that it was time to send him for swimming lessons. We could keep our eyes on him as much as we wanted but the surest way to keep him safe would be to teach him how to swim. 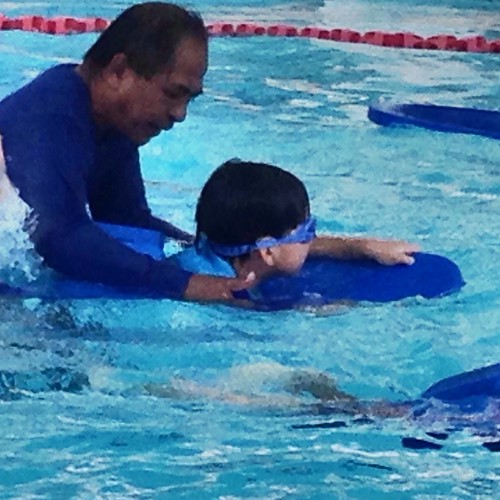 Although he wasn’t crazy about swimming lessons – he would much rather splash around and have fun – he still listened enough to his instructors to make some progress in the pool. It was all good until he had to jump in from the deep end and swim to the edge. For reasons I could not fathom, he had suddenly developed an inexplicable fear of deep water. The lessons would go smoothly up until the end when it came time to jump.

I was utterly confounded by this change in behaviour because he was always fearless to a fault and leaping into unknown waters without a second thought. I tried everything I could think of but nothing I said or did could help him get past it. Finally, I threw in the towel and waved the white flag. I handed the baton to DH and told him it was his turn to “handle” his son. I left him on “swimming duty” with the boys and when I came back, G2’s coach was beaming from ear to ear, relating to me how G2 had jumped into the deep end on his own without any fuss – from the diving platform (instead of the edge of the pool) no less!

What magic words did DH say to G2? It must be “boy speak” because I didn’t understand any of it. I guess certain things just require the male parent and as much as I want to feel on top of it all, I may have to accept that there will be aspects of being a parent that I won’t grasp just because I’m Mum. While it is absolutely crushing to see that my boys do better when I’m not around, I try to look at it from the positive perspective that they are secure enough in my presence to express their vulnerability. That can’t be a bad thing.