We took the boys down to Singapore over Christmas. In between catching up with friends and family, we managed to see a few sights around Singapore that proved to be an excellent learning experience for the boys – well, Aristotle more so than Hercules. I really enjoyed our trip because this is how I’ve always envisaged education should be for the boys – we were together as a family and we had loads of fun exploring and learning new things together. After our visits, the boys came away with a fun life experience, new knowledge from what they’d seen and an increased curiosity for the subjects they learned about.

Gardens by the Bay

This turned out to be the real highlight of our trip. We were so impressed by this place that I’ve decided to dedicate a blog post entirely on this. Meanwhile, check out Cloud Forest below…

We saw part of the Maritime Experiential Museum prior to our tour of the SEA Aquarium. This section is a temporary exhibition – “Pirates of the East” (available until 31 December 2012). It offers visitors the opportunity to travel through the ancient maritime silk route. Some of the activities available:

Spice matching – match the spice to its original source and learn more about them. Includes ginger, cinnamon, cloves, and cardamon.

Make your own Chinese Junk – these activity cards are free for visitors to take home.

Play the pirate game and learn more about the ancient Pirates of the East.

Boasting to be the world’s largest oceanarium, we thought it was not to be missed. Perhaps our expectations were set too high, but this one was a bit of a let down. My godson was disappointed that he didn’t get to see any octopuses (in case you’re wondering, according to the Merriam dictionary, the plural for octopus can be either “octopuses” or “octopi” – both are correct). The sharks were disappointingly small for the “world’s largest oceanarium”. Ironically, the kids were more fascinated with the divers than they were with the marine life.

I should also offer some advice to parents with young children like Hercules… There is a “petting” station where visitors can GENTLY touch the starfish. I would strongly advise against letting your child touch the starfish. Hercules did more than gently touch the starfish – he picked it up, turned it upside-down, and started waving it in the air as he inspected the underside of the starfish (much to the shock and horror of the Aquarium staff).

Naturally, they couldn’t show us the creatures of the deep but we did get to see images of angler fish and tripods – which Aristotle remembered from “Finding Nemo” and “The Cat in the Hat: Wish for a Fish – All About Sea Creatures“.

It seemed rather timely that the Discovery Channel at the hotel was playing “River Monsters“. Aristotle watched the episode on the “Tiger Fish” with avid fascination. He’s now eager to watch the rest of the documentary.

We rode this train during our previous visit to Singapore. This time, it was all decked out with Christmas decorations. Hercules enjoyed it so much the first time that he demanded to ride on it again when he realised we were in Vivo City. Hercules has a good recall for locations and remembered that Vivo City was the place he rode the train and he kept asking for it. He wanted to go “again, again” so I had to convince him that it was more fun to chase after it instead. He wore himself out running after the train, yelling, “Catch the train!” 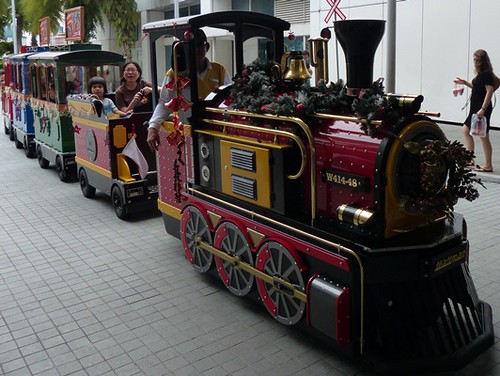 Available 10am-10pm daily at $6 a ride. Children under 90cm need to be accompanied by an adult (no additional fee required for accompanying adults). Tickets can be purchased at the starting point which is located near SingKids #01-171-174.

We also had plans to visit Legoland / Puteri Harbour Family Theme Park which are in Johor Bahru (on the way to Singapore) but we missed out because we dawdled too long on our decision of which park to visit and ended with with neither. Luckily the boys didn’t notice…

The other place we wanted to visit but didn’t get time for was Marina Bay Sands. We drove past the building and Aristotle was fascinated by the “ship on top of the three towers”. I finally googled it and found out that it is a hotel/skypark/museum/convention center/casino/shopping mall rolled into one. 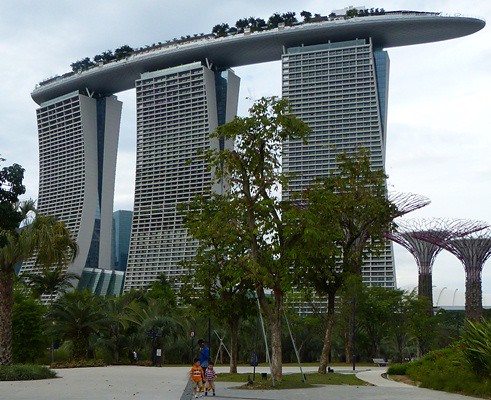 What a pity we missed this one because it turns out that they are currently displaying a dragon exhibit at the hotel lobby and dragons are a current fascination of Aristotle’s ever since he saw How to Train Your Dragon (which prompted him to read all the books in the series written by Cressida Cowell). They also have cool activities at the Art/Science Museum like the Art of Brick which will be a hit for Lego enthusiasts.

This is definitely one place on our list for our next trip down to Singapore.