This is a trip report of our recent visit to Singapore when I took the boys:

If you’ve never been to a Pokemon Safari Zone before, this is how it works:

On the day of your event ticket, everyone gathers at the designated meeting point (there were two for this event). When the event begins, a special Pokestop will appear. You have to spin the stop and it will ask you to scan your QR code to enter the event. Once you gain entry into the event, special pokestops and Pokemon will appear that only event invitees can see. Players who have not been invited will only see regular pokemon and stops.

The images accompanying the special Pokestops featured past start pages for the PokemonGo App. These were a few that I took screenshots of:

People have told me that PokemonGo is dying game and that it is only for kids. Well, if they’d been in Sentosa for the Safari Zone event, I’m sure they’d rethink those misconceptions.

We also saw a famous Pokemon Youtuber – I don’t know his name since I’m not a true fan. I only knew he was famous because there were people trying to get his autograph and G1 told me so.

There were lots of photo opportunities, like this real life pokestop:

A chance to take a photo with Smeargle the photobomber Pokemon:

There was also a queue to take photos with Aloha Pikachu:

And a giant floating Lapras: 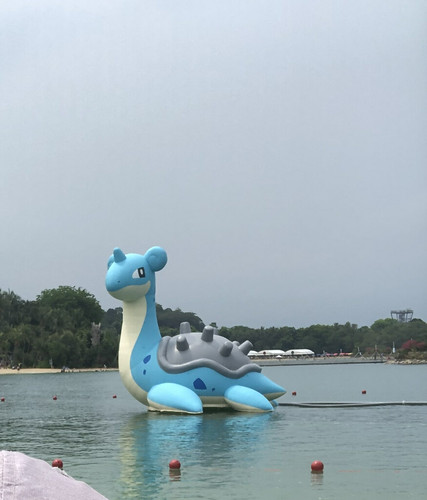 As our first Pokemon event, I thought it was pretty impressive. Unfortunately, like the newbie that I am, I didn’t do the research and failed to take full advantage of what the event had to offer.

The week leading up to our trip, DH read about the new Pokemon Center opening in Changi Airport and told me about it. The idea was to surprise the boys with a visit.

Even though I read the article about the Pokemon Center, in my mind, I thought it was just one new shop in the existing Changi Airport. It did not occur to me that Jewel was a brand new extension to Changi Airport and that half of Singapore would be there when we arrived. It probably didn’t help that we arrived at 3:30 pm on Good Friday. Yes, I also missed the fact that it was Good Friday – a public holiday in Singapore but not for us in Malaysia.

The queue to enter the the Pokemon Center was five blocks long and they were handing out tickets that would allow you to start queuing only from 5-6 pm. To get into the queue line! Not to get into the store! It was insane!

We didn’t try to get in until the next afternoon. G1’s rationale was that most of the Pokemon fans would be in Sentosa catching Pokemon so it would be safe to try again. According to our local insider, weekends are not as bad as public holidays because most families have their usual extra-curricular programs for the kids. Public holidays are fair game because everyone there will be no special classes and activities on.

Whichever reason it was – maybe both – it turned out to be much better for us. We got into the store only after a fairly short wait – all things considered. The boys were in seventh heaven, but I felt somewhat underwhelmed by the Pokemon Center. For a Pokemon merchandise shop, they didn’t really have much. It was mostly soft toys, a few games, some miscellaneous items like keychains and bags, and hats. I was hoping to get a t-shirt but they didn’t have any! Not even the ones their staff were wearing.

For the record, Jewel is a large shopping mall attached to Changi Airport by a series of walkways. To get to Jewel, you need to make your way to Terminal 2 or 3. From there, it is a 5 to 10 minute walk from the Departure Halls of Terminal 2, or Terminal 3 via the link bridges.

Despite the stifling crowds, Jewel is quite a sight to behold. As much as we wanted to stay and enjoy the place, there were queues to get into many places. My brother wanted to treat us to the Shake Shack and thought we could get in for an early dinner. It turned out that the queue was 3 hours long – even at 4 pm! Makes me wonder if they have been waiting since lunch hour. Even A&W had a queue to get in (although I’ve been told that this is the first A&W to open in Singapore in 16 years).

Aside from eating and shopping, Jewel boast a host of attractions to see and do – most of which are only open in June (unless otherwise stated below).

Because I have a thing for mazes, I must say that I am most looking forward to the Hedge and Mirror mazes. Although I don’t think we will be heading there any time soon. It would probably be best to wait until the excitement fades a little.

For added convenience, you can also stay at the attached hotel – Yotelair – which offers rooms for as low as S$100+ a night (or so it was at the time of writing this article).

Wonderland at the ArtScience Museum

Wonderland is an award-winning, immersive and interactive exhibition that was developed by Australian Centre for the Moving Image (ACMI). Now you can follow Alice down the rabbit hole and explore Wonderland through a unique perspective.

Is there a hidden passage behind that mirror?

Use your special map to activate the interactive stations:

What’s in that mirror?

“Drink Me” and shrink down to size:

Join the ranks of the Queen of Hearts’ army and paint the roses red!

Take a look at the various depictions of Alice in Wonderland over the years:

The Alice in Wonderland Exhibition will be at The Art Science Museum in Singapore until 22 September. It’s quite an experience and I highly recommend it. I would only caution parents with young children because some elements could be perceived as scary.

If you plan to visit, I would suggest purchasing tickets online ahead of time – especially if you plan to go on a weekend or during school holidays. The exhibition admits a set number of visitors and you could miss out.

I didn’t do my research, so I neglected to get the pass to visit Future World, but this is a permanent exhibition so we’ll have to make sure we check it out the next time.

There is a bundle ticket for both Wonderland and Future World.

Past Adventures in Singapore