I know… for an ex-dentist, I don’t write a lot about children’s oral health. We’ve been using manual toothbrushes for the longest time and I’d never thought much about it until my brother put this on my radar – the Philips Sonicare Kids electric toothbrush. 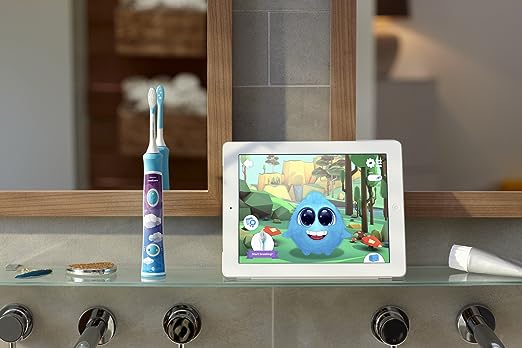 It’s been around for a while now so this is certainly old news, but the boys have been using it for nearly a year now so I figured it would be a good time to review how well it’s been working for them.

First things first, electric toothbrushes cost more than a manual toothbrush so do we even really need one? When I was in dental school, the answer was “no”. As long as you took care to brush your teeth well, there was no difference between the electric brush and the manual one. Unless you’re a kid or anyone with manual dexterity difficulties. In these instances, an electric brush will definitely do the job better.

Admittedly, it has been over 20 years now since I was last in dental school so the facts have altered somewhat. According to Consumer Reports, some 56 studies have found that electric toothbrushes have an edge over manual ones. However, that edge is not significant unless you already have gingivitis (a mild form of gum disease). If you are disease-free, then a manual toothbrush will serve you just as well.

Compared with manual toothbrushes, electrics reduced dental plaque 21 percent more and gingivitis (inflammation of the gums) 11 percent more after three months of use, the team from Cochrane found.

G1 and G2 were 11 and 8 respectively when they first started using the
Philips Sonicare Kids electric toothbrush. They definitely old enough to have mastered the art of toothbrushing and manual dexterity should not have been an issue. Were they brushing regularly and well enough? Now that is an interesting question I do not have the answer to.

First things first, we should go back to basics. Brushing your teeth serves two purposes:

Although, strictly speaking, brushing your teeth is really for preventing gum disease. Plaque bacteria likes to grow along the gum line where it irritates the gums and causes gum disease if it is left undisturbed for too long. It is the action of the brush that removes the plaque and protects the gums from damage.

Toothpaste (containing fluoride) is the stuff that prevents tooth decay. All you really need to do is smear a dab of toothpaste all over your teeth with your finger and that would work as effectively.

So there you go – tooth decay and gum disease in a nutshell. When we talk about the effectiveness of a toothbrush, we’re really only talking about it in terms of preventing gum disease.

How to Brush Your Teeth Well

The next question that begs asking is “how well do you need to brush your teeth to stave off disease?” To be realistic, it is impossible to remove all plaque from your mouth. What we’re really doing (as one of my lecturers once said) is simply moving the plaque around. We’re moving it away from the gum line with a toothbrush so our gums have a chance to recover before more plaque builds up again.

How frequently do we need to clear the plaque? According to the studies when I was in dental school, it was once every other day. Where did we hear that we had to brush our teeth twice a day or after every meal? From the manufacturers who wanted us to use more product. Although I would probably make it a habit to brush daily because it’s easy to forget if you’re working on alternate days.

As mentioned earlier, the purpose of brushing your teeth is to remove plaque build up along the gum line. To do that, we need to aim the toothbrush bristles at the gum line and either make small jiggly movements or tiny circles. We start on the cheek side of the top right and move around the arch of teeth to the top left. Then we move to the tongue side of the top right and repeat the process all the way around to the top left. Repeat with the bottom teeth. Give the biting surfaces a scrub to remove any food debris from the crevices and you’re done.

Making jiggly or circular movements can be tricky, not to mention tedious, for young kids. It is much easier to scrub with a horizontal action across the teeth. I know, because I was a kid that did that even though I was taught to use the jiggly movements. An electric toothbrush will make the jiggly movements for your child. All they have do is hold the brush in place and slowly move it around.

The app is also a really fancy tooth brushing sticker chart. Every day your child brushes her teeth, she can collect points, earn achievements, and unlock rewards for her sparkly (which is like her pet tooth on the app).

It is kind of gimmicky but it had both boys captivated for a while. G1 is still religiously collecting his points and rewards, but G2 has long given up using the app. App and rewards aside, G2 is much better with brushing his teeth (without Mama nagging) so that’s a win for me.