According to Po Bronson and Ashley Merryman in Top Dog, building competitive fire boils down to these three things:

How being in a group encourages competition:

According to Top Dog, boys naturally gravitate towards being a part of a group while girls tend to form pairs. By understanding the rules of a pair-based relationship, we can gain an insight into why girls are more reluctant to compete unless the circumstances are favourable:

Getting Girls into Groups

If girls don’t naturally play in groups, then how else can we encourage this so that they, too, get the opportunity to build their competitive fire? Top Dog doesn’t really get into this part so I’m deviating off on a tangent here. They do say that even in groups, girls still want to operate within the rules of a pair-based relationship and are reluctant to get competitive. Girls want better odds for winning before they are willing to compete.

So if we can create the right scenarios where girls get enough experience working within a group, we might be able to nurture their competitive fire. These are some scenarios that might create that environment: 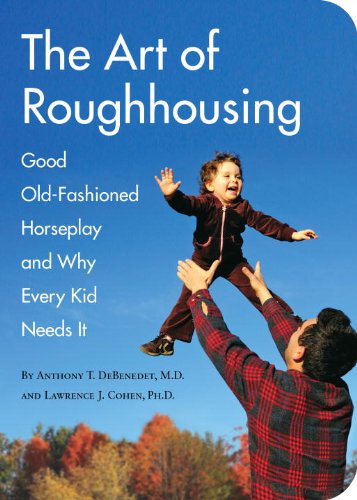 Rough play is good for the brain. It stimulates neuron growth within the cortex amygdala and cerebellum regions, areas responsible for emotional memory, language and logic. How well kids roughhouse is actually linked to how well they do in their early years of school – up to grade three. Intense physical play helps them develop not just cognitive intelligence, but emotional intelligence. While pinning a squirming pal down on the floor, they learn to read body language, facial expressions and other social cues, like when their friend has had enough. – Anthony DeBenedet, physician.

The most successful roughhousing requires parental involvement. Roughhousing with parents encourages exploratory behaviours and risk taking within the confines of a secure relationship. While roughhousing with other children can get out of hand, parents can sense how much to push and when to pull back by observing the feedback from the child. That said, it is important for the parent to lead the play and establish boundaries. Without a “strong-dominant” parent, roughhousing can also backfire.

When we roughhouse with our kids, we model for them how someone bigger and stronger holds back. We teach them self-control, fairness and empathy. We let them win, which gives them confidence and demonstrates that winning isn’t everything. We show them how much can be accomplished by cooperation, and how to constructively channel competitive energy so that it doesn’t take over. – DeBenedet and Cohen

Roughhousing can be equally successful with either parent – father or mother – although the statistics show that it is usually the father who is more comfortable with roughhousing. Roughhousing peaks at about age 3 to 4 and continues up until the age of 10.

These are some ideas from The Inspired Treehouse:

There are also loads more ideas in The Art of Roughhousing.

While I do remember roughhousing with the kids, I’m pretty sure I didn’t do it nearly as much as I should have. What happens if your child is older than 10? Is it too late for roughhousing? If not, then what is the older child’s equivalent for roughhouse play? I wish I had an answer for this. If I had to make a guess at it, however, I would consider a contact sport, like martial arts. Why martial arts? Because it is a little like roughhousing with rules.

Competitive Fire: Teach Them Not to Quit

As adults, even we struggle with our commitments – seeing them through to the end when all we want to do is quit. But as an adult with experience and a better developed prefrontal cortex, we are able to assess the effects of quitting versus persevering. We know that if we quit now, we’re going to regret it and so we push on.

A child, especially a young one, can’t see that far. All they can see is the immediate gratification of quitting now. They may not even regret the decision until years later, when they’re older and able to look back with greater maturity and understanding. Our role as the parent, therefore, is not to never let them quit but to increase the barriers to quitting and help them get past that difficult stage. If they still choose to quit after, that’s a different story.

As parents, we don’t just ask them not to quit: we order them. We equate quitting with moral transgression, a taboo. We try to make it clear that the shame of quitting is far worse than the shame of merely losing. We insist they can’t quit on a play, can’t quit until the final whistle, can’t quit on their commitments. They have to learn to give extra effort at the very moment they lack the desire to give it. They need to learn to circumvent the desire to give in. – Top Dog