It’s been a while since we last visited Museum Victoria – Melbourne Museum but we decided to check it out after hearing so much about the new bug exhibition – Bug Lab: Little Bugs, Super Powers. The Bug Lab premiered in Wellington last year at the Museum of New Zealand Te Papa Tongarewa. We were quite fortunate to catch it at Museum Victoria, the second museum to host this amazing exhibition.

“The way it’s been executed is unlike anything you’ve ever seen in a bug exhibition.” – David Wilks, General Manager of Weta Workshop

After visiting the exhibit, I must concur with Mr Wilks. It probably shouldn’t have come as a surprise since Weta Workshop, who created this exhibit in collaboration with the Museum of New Zealand Te Papa Tongarewa, is better known as the group who did the costumes and effects in The Lord of The Rings and The Hobbit trilogies. The experience was a little like stepping into the world of Pandora from Avatar.

If you can’t visit the exhibition, you can grab a sneak peek from the video below. It does nothing to capture the true experience of the exhibition but it does show you some of the detail and how cleverly thought out this whole exhibition is.

The Bug Lab has four main attractions and the stars of the show are these four bugs:

Each station plays a short video sharing some cool facts about each insect, an impressive display of the bug, and related activities for children to gets hands-on. The rest of the exhibition is made up of other stations that offer fun activities and bug facts. These were some of the ones we saw: 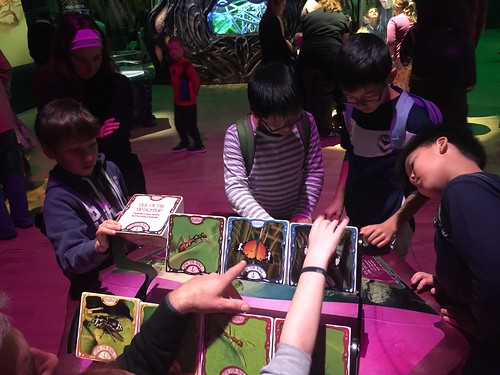 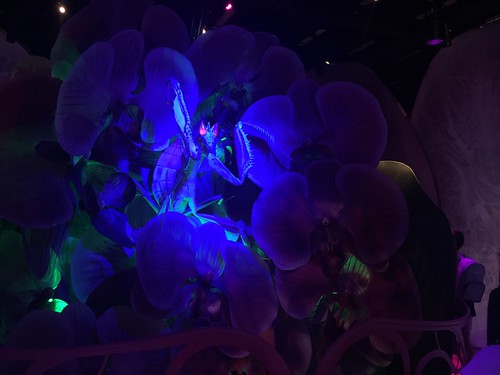 The Orchid Mantis is a Malaysian insect that uses aggressive camouflage and ninja-like stealth to capture its prey. Masquerading as an orchid, it stays perfectly still, rotating only its head to check out its surroundings. The Orchid Mantis lures insects into its deadly grasp by making itself look like the best flower around. 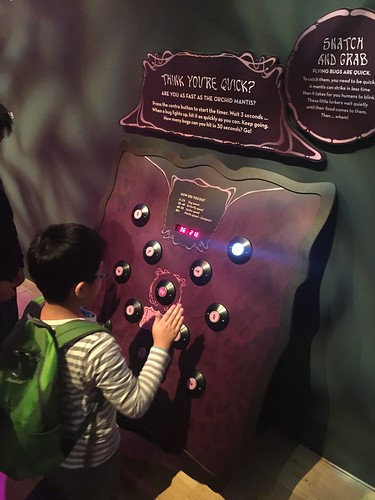 The hands-on activity in this exhibit challenges children to test their reflexes. Are they as speedy as an Orchid Mantis? See how many bugs they can catch in 30 seconds.

More about the Orchid Mantis: 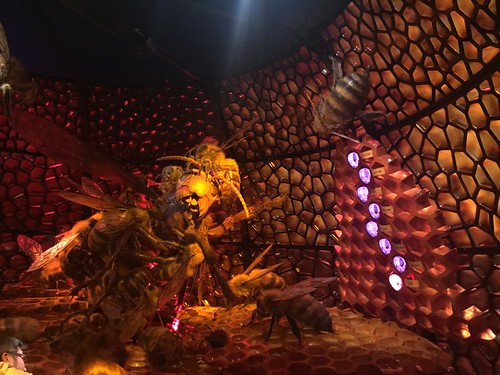 It only takes 30 hornets to destroy a bee hive of 30,000 bees, but Japanese Honey Bees have a unique defense. They swarm the hornet scout and vibrate their flight muscles to raise the temperature until the hornet is cooked alive.

As a hornet enters the hive, a mob of hundreds of honey bees surrounds it in a ball, completely covering it and preventing it from reacting effectively. The bees violently vibrate their flight muscles in much the same way as they do to heat the hive in cold conditions. This raises the temperature in the ball to the critical temperature of 46 °C (115 °F). In addition, the exertions of the honey bees raise the level of carbon dioxide (CO2) in the ball. At that concentration of CO2, the honey bees can tolerate up to 50 °C (122 °F), but the hornet cannot survive the combination of a temperature of 46 °C (115 °F) and high carbon dioxide level. – Wikipedia 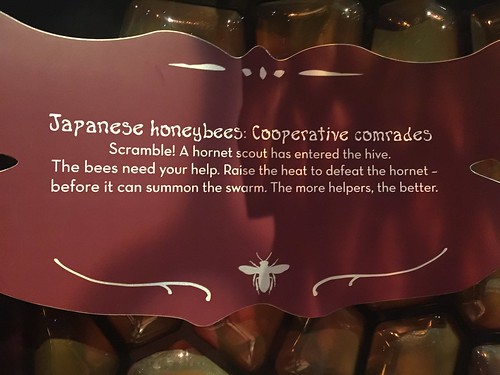 In the Japanese Honey Bee exhibit, the children have to work together to raise the temperature by rubbing a panel. If they can increase the heat sufficiently, they defeat the hornet. G2 had the most fun with this challenge and wanted to come back for a second and third round.

More about the Japanese Honey Bee: 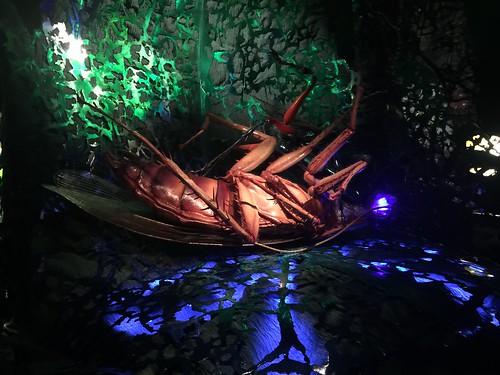 The Jewel Wasp sounds like something out of a sci-fi, zombie movie. By injecting its venom into the brain of a cockroach, the Jewel Wasp turns the cockroach into zombie, a nursery, and a meal for her young. 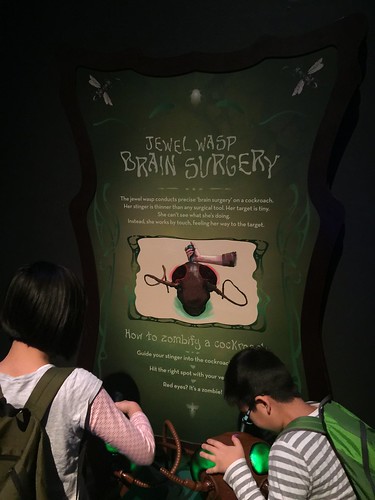 The process of injecting venom into the cockroach’s brain requires surgical precision. In this exhibit, the children take up the challenge of turning a cockroach into a zombie by performing their own brain surgery.

More about the Jewel Wasp:

As old as the dinosaurs, they have ultra-fast reaction speeds, four wings that can beat separately, and pinpoint accuracy on a hunt. The dragonfly is an expert flier with such amazing vision that it can see almost 360 degrees around itself and map the trajectory of its moving prey. While lions are only able to catch their prey once out of every five hunts, the dragonfly will be successful 95 times out of 100.

There was no related activity for this exhibit but the zoetrope model was a pretty cool feature to watch. We learned how zoetropes work later on when we visited Screen Worlds at Federation Square.

After the Bug Lab, we went back to the main museum to follow the scavenger hunt on the Museum Victoria Time Lens app. After the success of the MinNature treasure hunt, I figured that this would be a great way to keep G2 engaged with the museum exhibits.

The app was launched in 2013 and it doesn’t look like it’s had an update in a while so it is a bit glitchy. Nevertheless, the kids had fun with it and we spent quite a bit of time hunting down all the museum treasures featured in the app. I wasn’t sure how much the children were learning from this experience until G2 came home and repeated the story about Pharlap and cracked a joke about “Smellbourne”.

You don’t need to go to the museum to play the app but I thought it enhanced the experience. It would be cool to see it updated to focus on different exhibits but it doesn’t look like we will be seeing that. All in all, it was another terrific experience at Museum Victoria. I wonder what new treasures we’ll discover the next time we return.