G2 has always been my distracted boy. He is the boy who would put the milk carton in the sink (still full of milk) instead of back in the fridge. With his head in the clouds and rarely on what he was doing, he is the child I worry about when I think about his ability to focus. Focus (sustained attention on the task at hand) is one of the executive functions and we all know how important those are.

So we’ve been trying to help him work on this for some time now and one of the activities we engage in is playing board games. Aside from the many reasons why board games are great (which you can read about if you click the link), board games are a fun way to practice skills that might otherwise be tedious to work on.

When you’re playing with younger children, finding the right board game can be tricky. You need a game that is fun to play but not so complex that it becomes difficult to remember all the rules. Most board games are aimed at children from at least 8 to 10 years and up. While some of the younger kids are able to play those games, it gets significantly harder when your child doesn’t have the attention span for it.

We’ve tried a variety of games with varying levels of success. Here’s one really simple game that worked for us: 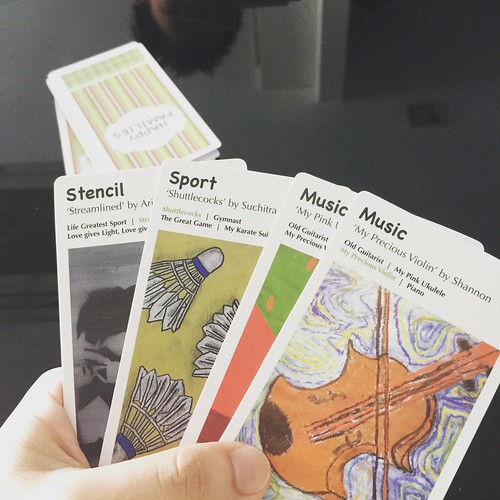 It’s a little smaller than your usual deck of Happy Families because it only contains 28 cards. This works very well as a starter set since there aren’t as many cards to keep track of. It also means the game ends fairly quickly which is better for shorter attention spans.

Then G1 came up with the idea of creating his own deck of Happy Families. He called it Happy Pokemon Families and it’s made up of – yep, you guessed it – Pokemon characters. G2 liked them so much that he’s been asking to play a game almost every night before bed time. I guess it was worth the effort of laminating them after all. 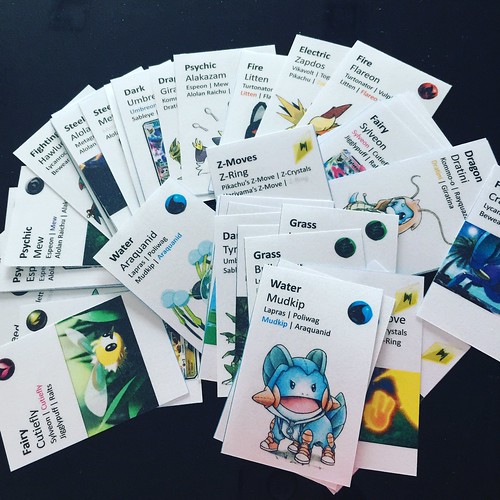 G1’s Happy Pokemon Families Deck is larger than our school deck and contains 48 cards. It’s also trickier to keep track of the cards unless you’re familiar with Pokemon TCG. In other words, G1 has a significant advantage over the rest of us since he’s our resident Pokemon expert and creator of this deck.

How to Play Happy Families

The rules are simple. You start by dealing four cards to each player. The remaining cards form a deck on the table. The youngest player starts first and the game moves clockwise.

During a turn, a player can ask any other opponent for a card as long as he has one card from that family in his hand. If the opponent has the card, she has to give it up to the player. If she doesn’t have the card, the player has to draw a card from the deck and it becomes the next player’s turn.

Once a player has collect all four cards from a family, he announces his family and places it down. The game continues until one player has no more cards or all the cards from the deck have been drawn. The winner is the player who has collected the most families.

How Does Happy Families Teach Focus?

The ability to focus is like a lot of other skills – you get better at it when you practice. Like a muscle, it gets stronger the more you exercise it. So we can think about playing Happy Families as the exercise.

G2 who never pays any attention at all to what everyone else is asking for surprised me one day when he stole my nearly completed family right out from under my nose. I was so convinced that I wouldn’t have to worry about him that I turned my full attention towards G1. So yeah, he is learning to pay attention.

Once you start playing Happy Families, it isn’t hard to see all the skills it helps children develop. From working memory (so they can keep track of the cards and who’s looking what) to logic and reasoning (so they can deduce which cards a player is holding based on the cards he’s asked for). The more cards and players you add to the game, the trickier it gets.

G1 thought that the game should be more interesting so he decided to SCAMPER it by adding three wild cards: