I know… I have boys so GoldieBlox doesn’t really apply to us. Then I remember the girl that I was who was interested in engineering but not encouraged to develop my interests and I think of my god daughters and my niece and how I don’t want them to be crushed the way I was. So even though I don’t have girls, I have to share this for the other parents of girls out there…

Some time back we wrote about GoldieBlox and the Spinning Machine for encouraging girls to explore their interests in engineering.

Girls are losing interest in math and science as young as age 8. Take a walk through a toy store and you can begin to see why; the “blue aisle” is filled with construction toys and chemistry sets, while the “pink aisle” is filled with princesses and dolls. Research shows that the earlier kids get interested in math and science, the more likely they are to go into those fields as adults. It’s time we gave girls more options. GoldieBlox is a series of interactive books + construction toys starring Goldie, a curious girl with a love of engineering. Goldie’s stories encourage girls to build, developing the spatial skills that are fundamental to engineering. While the story unfolds, girls get to build what Goldie builds.

Recently, we were delighted to discover that GoldieBlox has apps!

GoldieBlox and the Movie Machine

This is the first of the GoldieBlox apps to hit the market. It teaches girls how to make and animate their own movies.

GoldieBlox and the Movie Machine helps girls to learn how to make their own movies! They will draw, color, sticker, and photograph their way into the Bloxtown film festival by animating their own digital shorts with just a little innovation and a flick of the finger.

Recommended for kids 4 and up, this app teaches animation skills.

This newest GoldieBlox app encourages girls to learn how to code…

Attention, future coders! Goldie needs your help to deliver cupcakes! Goldie and her friends can’t remember whose birthday it is so the obvious solution is to deliver cupcakes to EVERYONE in Bloxtown! With cupcakes from the CUPCAKE-O-MATIC and Goldie’s new invention, the Super Speedy Rocket Skateboard, delivering cupcakes will be a breeze. But they need super-coding pal Ruby Rails and your child to put this plan into action!

Help Goldie code the path of the Rocket Skateboard around the grocery store to pick up ingredients. Next, head to the Bloxshop kitchen to scoop up the cupcakes. Loaded with sweet treats, head to Bloxtown for delivery! Children will learn new coding concepts as the map gets trickier, play mini-games for a change of pace, and earn stickers for their Bloxshop wall!

Recommended for children ages 4 and up, this app teaches children coding concepts.

GoldieBlox and the Parade Float 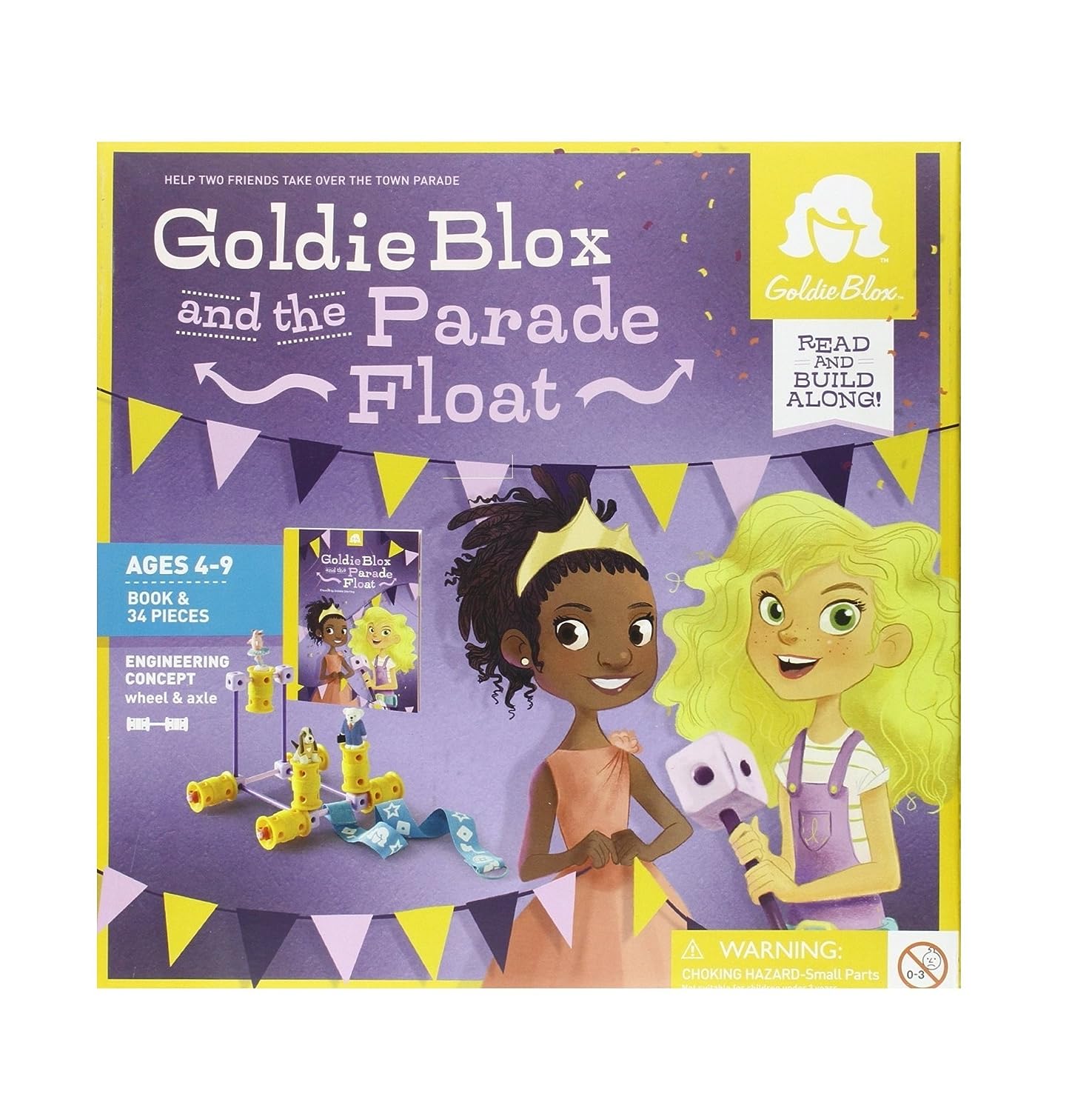 Goldie’s friends Ruby and Katinka compete in a princess pageant with the hopes of riding in the town parade. When Katinka loses the crown, Ruby and Goldie get building to teach their friends that creativity and friendship are more important than any pageant.

GoldieBlox and the Dunk Tank 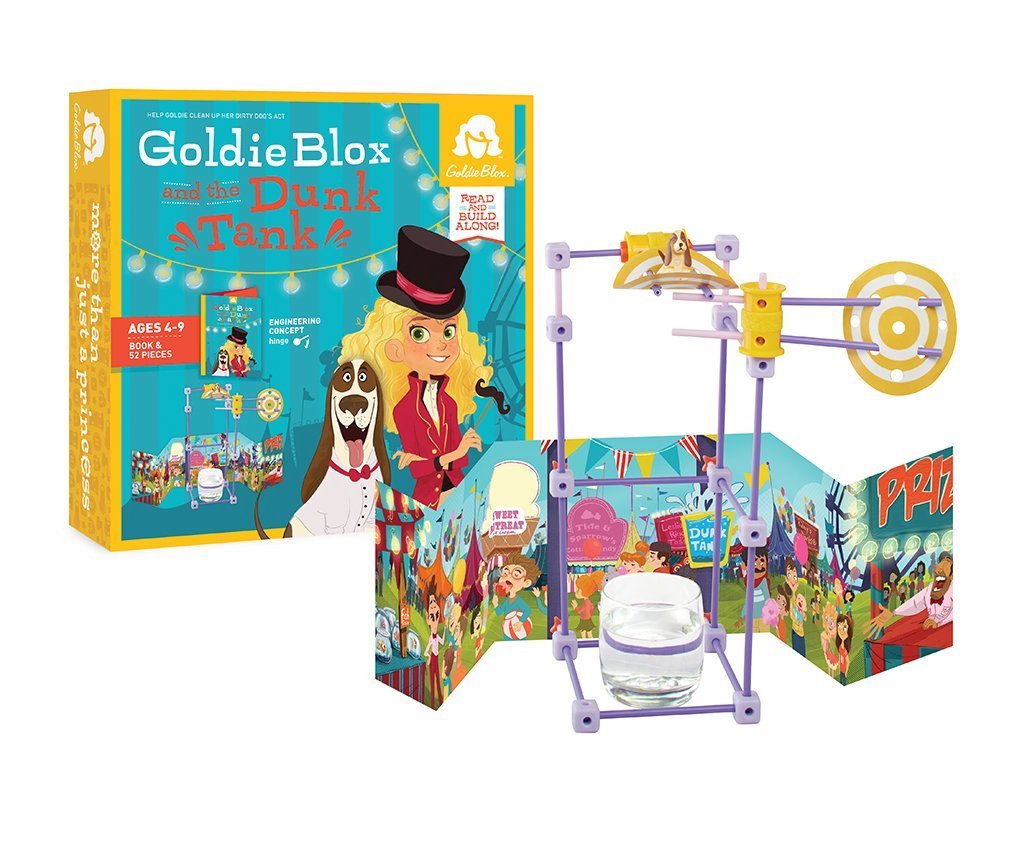 In GoldieBlox and the Dunk Tank, Goldie has to find a way to get Nacho clean. The only problem is: Nacho hates water and loves being a dirty dog. After many failed attempts at bathing him, Goldie finally comes up with the perfect contraption. As kids read along, they help Goldie build a dunk tank (and learn about hinges and levers) to get Nacho nice and clean so everyone can go to the carnival on time. 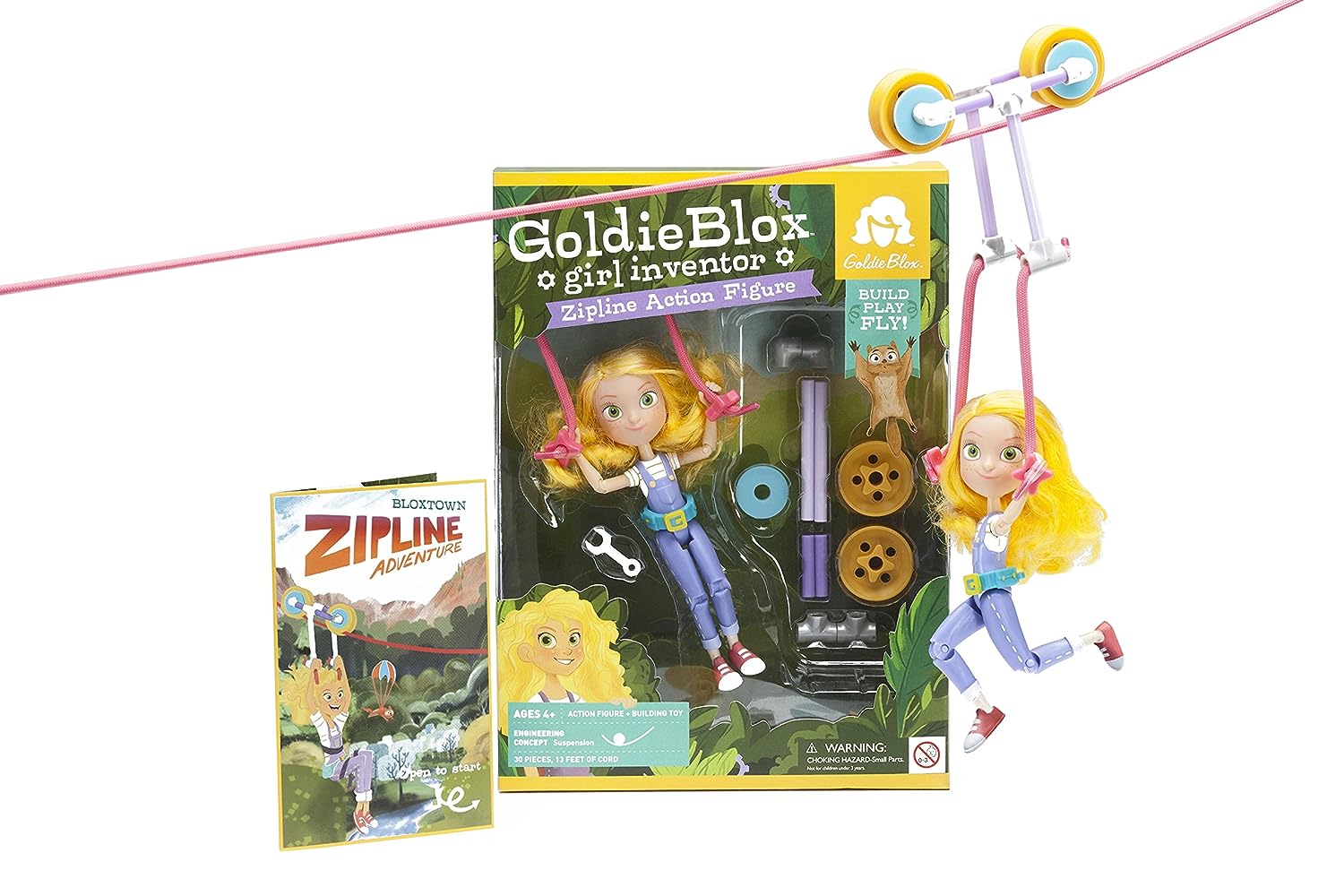 More than just a doll, Goldie’s articulated shoulders, hips, knees, hands, and feet are all ready for action. With a construction kit, kids get to build Goldie a zipline and send her soaring on zipline adventures!

GoldieBlox and the Movie Machine 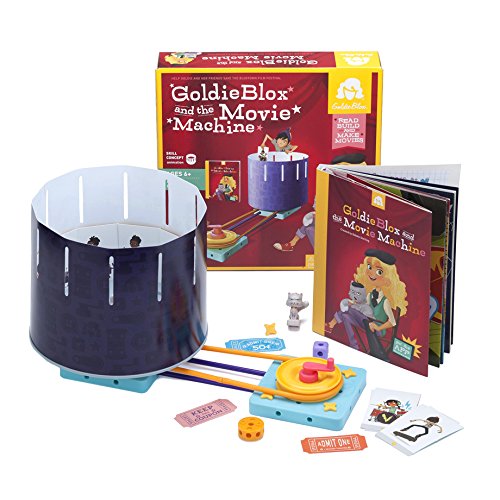 GoldieBlox and the Movie Machine teaches kids how to build a zoetrope and make their own movies. A story plus construction kit, you get to help Goldie and her friends team up to invent a solution and save the Bloxtown Film Festival from being canceled. 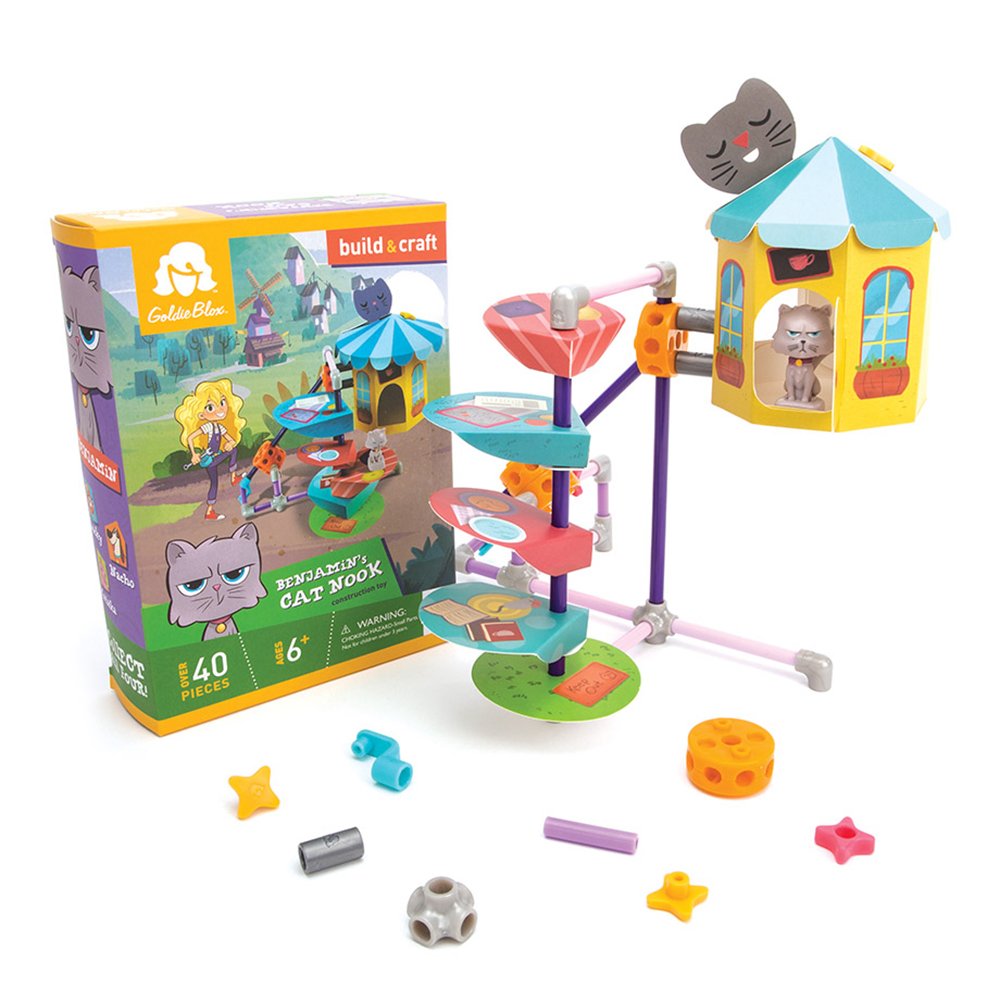 Benjamin Cranklin is always a bit of a sour puss, but maybe his spirits will be lifted with a new Cat Nook-and one complete with an elevator! Have fun learning to build the multi-level Nook while improving fine motor, spatial reasoning, and problem-solving skills. 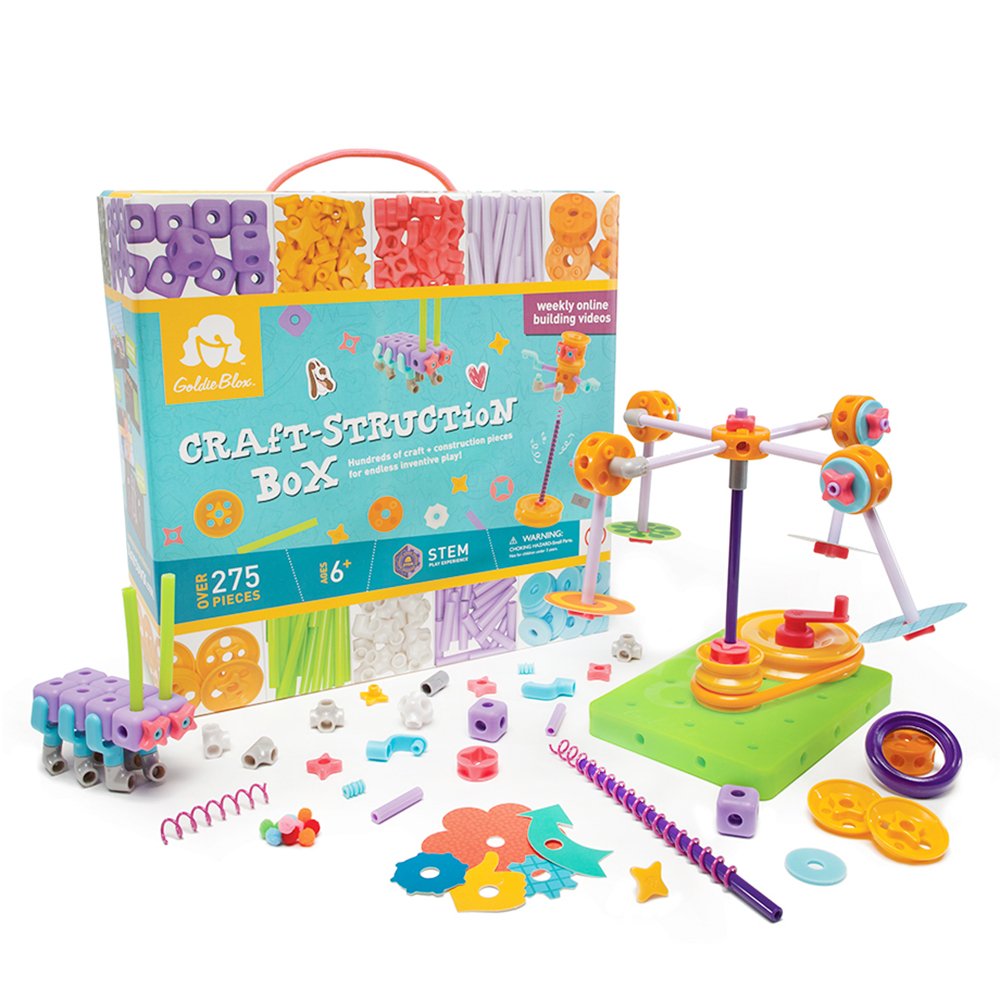 The Craft-Struction Box combines the best of crafting and construction for the ultimate open-ended play experience! Kids will think like Goldie to prototype and problem-solve. There’s over 275 pieces and how-to videos on BloxTown.com. as well as a poster to decorate your budding engineer’s workshop…er…bedroom!

GoldieBlox and the Builder’s Survival Kit 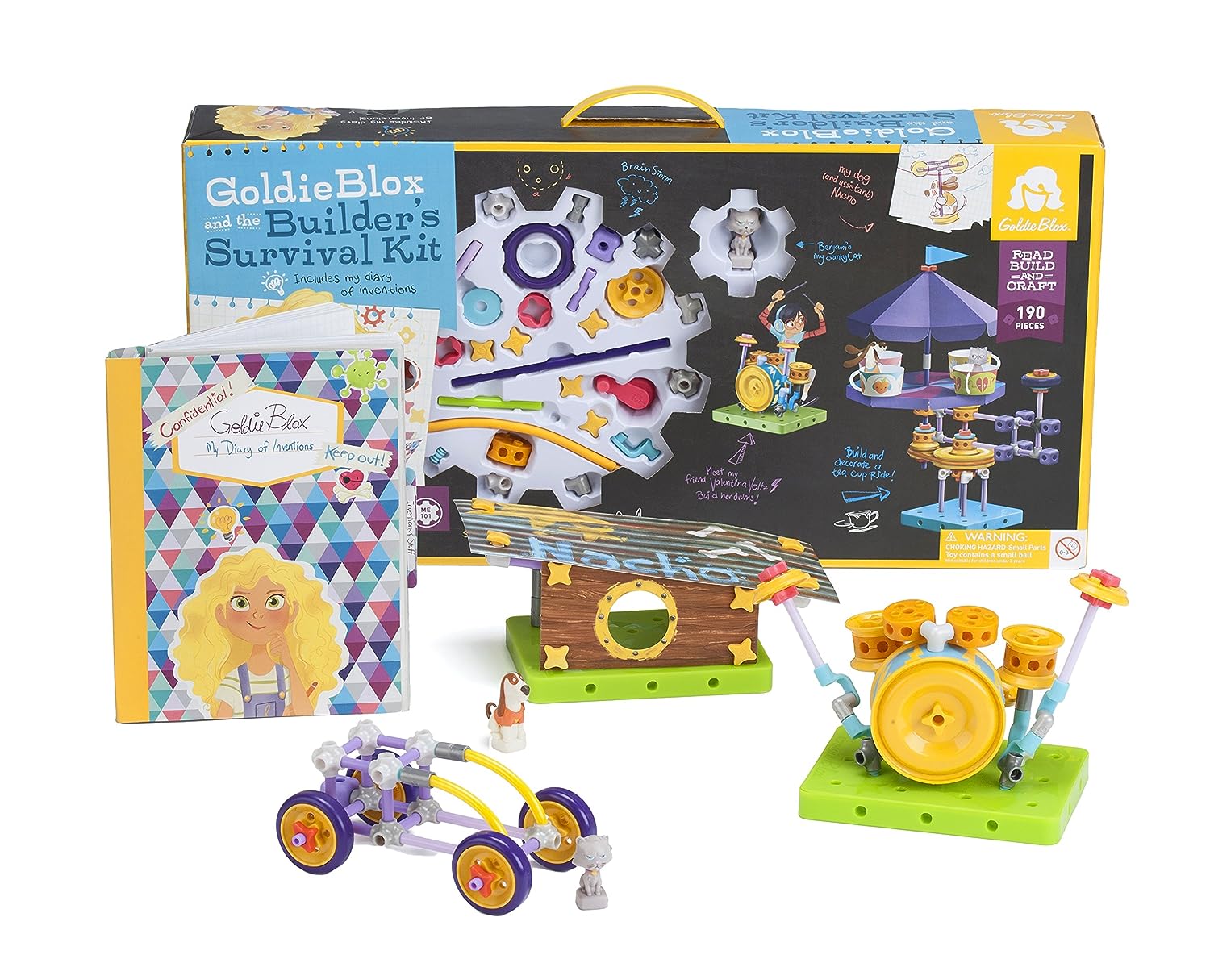