Some three years ago, I insisted that G1 pick up Judo for the following reasons:

Although I didn’t know it back then, Judo (and other traditional martial arts) are also great for developing executive functions, which are essential to success.

Getting G1 to follow a co-curricular activity that I have picked for him has never been easy. Far too often, I have allowed him to quit without consequence. Unwittingly, I had cultivated in him a bad attitude towards following-through. I learned my mistake when he told me he wanted to quit school at the tender age of kindergarten.

My intentions were good – the desire was to help him find his passion. Whenever he wasn’t interested, I had assumed we just hadn’t found the right thing. What I had forgotten is that passion takes time to develop – it is rarely love at first sight. By allowing G1 to drop his interests as quickly as a hot potato, he didn’t get the chance to fully appreciate the activity for itself.

When I was a child, my parents decided that I was going to learn the piano. I remember hating it. I had to be forced to practice and I am certain I was my piano teacher’s worst nightmare. But my parents persisted and I learned enough of the basics before we finally stopped for reasons that are somewhat hazy now.

Years later, I heard my cousin playing music on the piano that captivated me so deeply that I felt I compelled to learn it. My cousin taught me the opening lines and I took the sheet music home to learn the rest. Even though I wasn’t good enough to play by sight reading, I painstakingly memorised every note by heart until I could play the song as beautifully as my cousin. After that song, I went on to memorise more songs and my parents sent me back for piano lessons.

I think back to that memory and I seriously doubt that I would have picked up the piano on my own without the early piano lessons. It was a cascade reaction – if I had never learned the basics, I wouldn’t have asked my cousin to teach me that song; my parents would never have noticed my interest in playing the piano and I would never have discovered the joys of this instrument. Even though I didn’t appreciate it as a child, my parents’ insistence that I learn the piano ended up being a valuable experience for me.

So when G1 took on Judo, my only request was that he saw it through at least one term. When he wanted to buy the uniform, I told him I wasn’t buying a uniform for him to wear for one term. He then promised that he would stay with Judo until he reached black belt. I’m not entirely sure if he had any inkling of how long that was going to take when he made the promise, but I accepted.

G1 stayed on to collect his yellow belt, his orange belt, and his green belt. So determined was he to improve that he asked to increase his Judo classes from once a week to twice a week. Recently, he competed in his first championship. 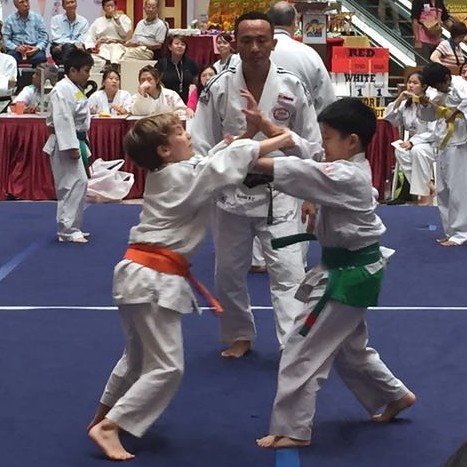 G1 may not be a physically talented judoka but it was with tremendous pride that I watched him spar. To see how far he has come in a sport that is not his element shows me how much he has grown in character and in mind. For that, I wanted to take this moment to stop and recognise his little victory.