Earlier this year, we supported the Kickstarter project ChemCaper. The project was successful in receiving funding and we’ve finally had a chance to play the game. Here’s what we think about it…

ChemCaper is a chemistry role-playing game designed to connect education and mainstream gaming. It is built upon a foundation of chemistry concepts bringing the science into a digital realm. It’s so subtle that students will learn about chemistry without even realising it. In the petcubator, they will learn about covalent bonds, ionic bonds and metallic bonds…

When crafting potions, they will use chemistry equipment like the Liebig condenser, a fractionating column, retort stand, and more. They will learn about chemical processes such as fractional distillation and centrifugation. 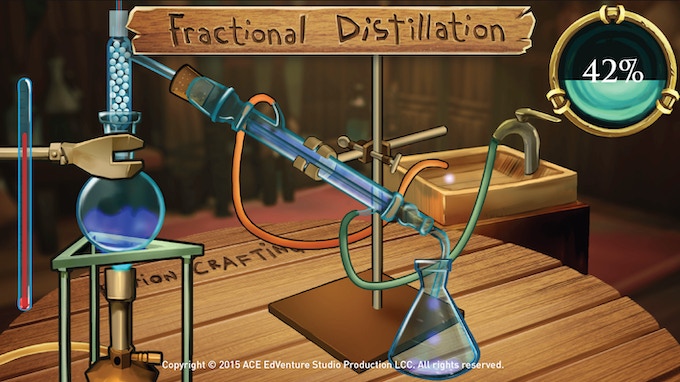 And that is exactly the idea behind ChemCaper – for students to learn the concepts of chemistry in such an engaging environment that they’re probably not even aware of it.

ChemCaper is the brainchild of a bunch of teachers who felt they needed new channels to engage their students more effectively. Starting out with a casual conversation in 2012 between Anne Tham (the mind behind this) and some former students, the project has since grown, mostly involving active teachers in their day jobs. Anne, has been teaching for almost three decades and has made making learning more engaging her calling card in her two international schools and multiple learning centres.

So the biggest pro(-ton) of ChemCaper is exactly that: kids enjoy playing the game – and that’s what really matters. It’s about building a bond between the subject and students; creating chemistry with Chemistry! The more engaging and interactive the learning process, the easier it is for kids to recall information (far cooler lessons than mere textbooks!). The dream is for kids to explore Chemistry – without the true nature of the learning actually registering. Shhhh… Ultimately, it would be great to hear them exclaim in class: “Wait a minute, I know this!” – Kickstarter

What others are saying about it:

“ChemCaper is educational the way Civilization is educational. It won’t teach you the subject directly; instead, fun is given top priority and the educational foundation on which it’s based just permeates every aspect of the game. It’s an education-laced supplement to life rather than an attempt at digitizing textbooks for those kids and their play-a-ma-jigs.” – Lena LeRay, Senior Editor of Indiegames.com

What’s the game about? Here’s a quick overview of the story:

Roub, a young Moon Being, is charged with searching for his people’s lost deity. He gets thrown into the lush world of Camp Ungku upon rumors that a glowing, mysterious being was there.

Having crash landed on the banks of sunny Camp Ungku, he is polarised into a cloudy search for answers, bearing the unnerving uncertainty of his parents’ fate as news of waves of attacks on his homeland, Reac Ta, crash upon his conscience.

Something sinister has turned the friendly petticles into vicious scheming creatures, aiding its motivation attacking the Moon Beings indiscriminately.

Young, pampered Roub now bears the weight of his world on his shoulders to demystify the conundrum that riddles it and its beings, whether he knows it or not.

The gameplay for the first level can be observed in the following video.

The game is recommended for children ages 10 and up but I introduced it to G1 (9 years old) and G2 (6 years old) anyway. Although they have played LEGO Harry Potter (which is another RPG – role-playing game), they weren’t quite sure what to do in ChemCaper. I had to lead them through the first part of the game before they started to get excited about it. Now the boys are playing the game on their own, although I must confess that I’m also quite hooked and have been playing it on the sly.

I’ve always been partial to RPGs – I’ve loved them every since I was a child – and it’s great to see my kids getting into them in an educational way. RPGs provide a great medium for learning – they stimulate problem-solving, foster creative thinking, develop persistence, and encourage curiosity. The fact that I also enjoy the game offers us a bonding opportunity as we interact with the game together – I don’t have to feign an interest I don’t possess. It’s win, win, win.

We’re really enjoying ChemCaper and thought you might, too. ChemCaper is available on Android and iOS – definitely, go check it out!

Related articles on technology and children:

Technology in Education – Programs for children: