There is a new adventure park in Putrajaya IOI Mall! It’s called District 21.

Designed with families and active lifestyles in mind, District 21 will give you a workout you won’t forget. Located indoors within the mall, you will never have to worry about get rained out. You can stay there all day if you want because the park tickets allow you multiple re-entry. Currently charging RM55 per entry (for an active participant), we thought it was a bargain deal considering many children’s jungle gyms are pretty much in that ballpark price range on school holidays and weekends. What’s more, District 21 is not just a playground for kids, it’s a playground for adults as well so everyone can get in on the fun together.

I feel I must add that District 21 is a serious workout. I usually row three times a week for an hour long each session and even that did nothing to prepare for this. Although, that said, it is serious fun and my boys are clamouring to go again. I had to haul them out of there and threaten never to return again before they would come quietly.

There are 11 attractions in all. We didn’t get to try them all because the kids either didn’t qualify or they weren’t interested. Since there weren’t enough adults on hand to mind the kids, I didn’t get to go either.

There are two mazes – the main one and the kids’ only version for the littlies. The maze is essentially a series of tunnels and wire cages that you have to negotiate to get to the end. You get a pair of grip gloves to make it easier to hold on to the bars without slipping – great for those sweaty palms!

The boys loved the Maze. I think it was probably their second favourite attraction at District 21. G1 handled the technical challenges without any trouble. G2 initially required my assistance so I had to go along for the ride every time he wanted to go into the Maze. The Maze might not look like much of a workout but after some half a dozen rounds through it and I ready to pass out from exhaustion. It was all I could do to hurl myself down the slide one last time.

The first part of the maze is “the robot” where the tunnels are enclosed. This part is somewhat challenging for the bigger person and claustrophobic individuals. The crawling on hands and knees part was also kind of painful for the “older” individual. 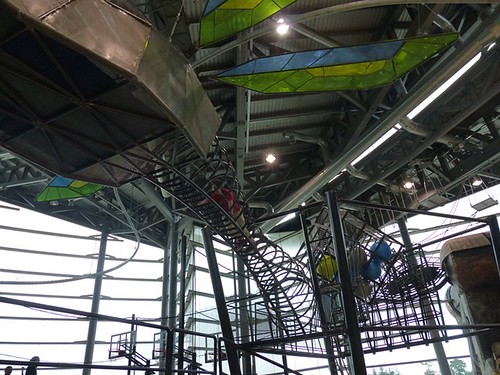 When you exit the robot, your next challenge is the ball cage. There is an alternate path if you’re not too confident about this one. 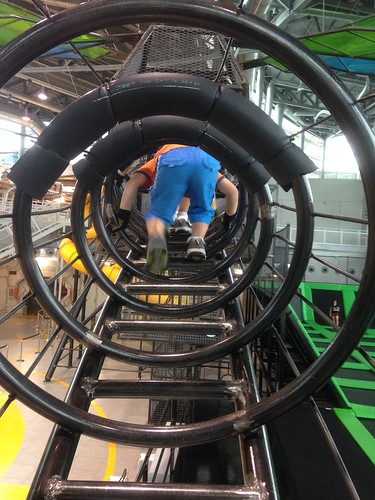 That’s G2 in front of me for a size impression of the tunnel – not exactly a lot of crawl space. At the end of this series of tunnels there is a long slide – also a tight fit – all the way down to the ground. 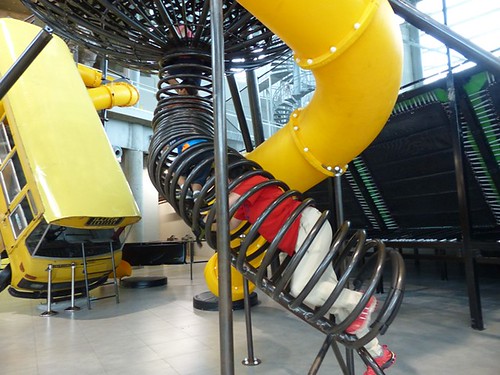 From here, you can either climb up into “the spider’s web” or bypass it and head for the bus. 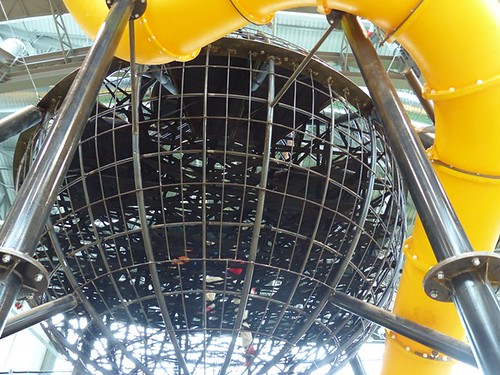 The spider’s web consists of several layers of webbing criss-crossing inside a ball cage. The task is to climb through the webbing to get to the top of the ball cage. The most technically challenging part is the fact that the webbing moves – you do not get a solid foothold and that was very scary for G2. We managed to make it up to the top with me lifting G2 layer by layer. Note to self: next time follow the wire cage up instead of climbing up through the center. 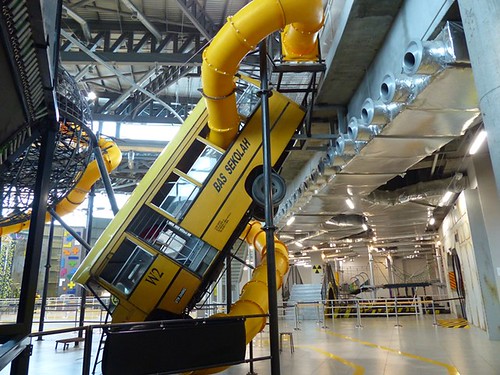 The last part is the bus which is an easy climb to another slide and then you’re done.

The tubby ride is like a water slide on land. 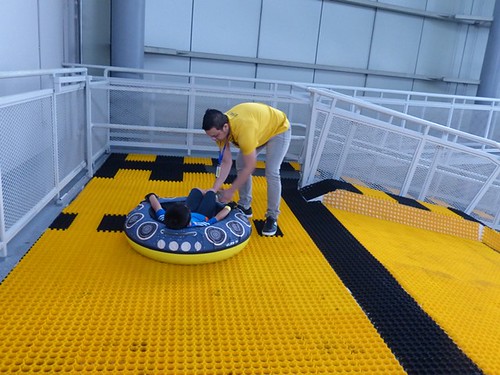 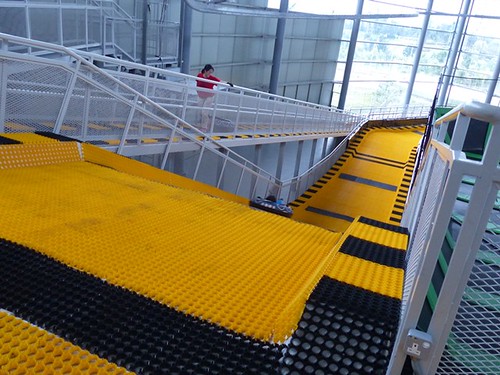 At the bottom, you have to drag your “tubby” back to the top. 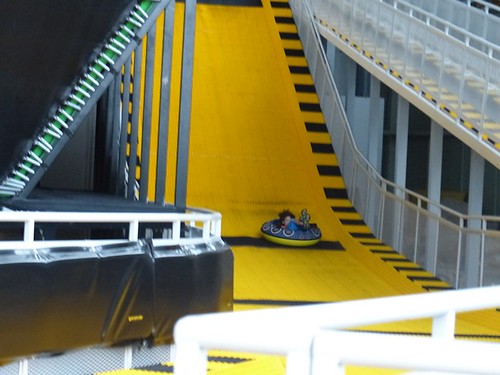 The Tubby Ride was G2’s favourite. I think we lost track of the number of times he did this one. Poor G1 got conned into dragging his brother’s tubby up the ramp a number of times.

True to their promise to keep participants active, GoPedal is a go-kart track for human-powered vehicles. If you want to crank up the speed, then get those legs going! 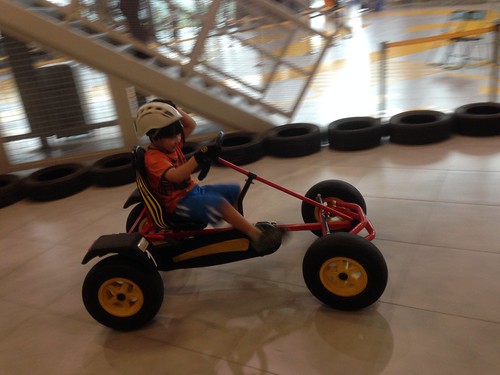 Launch Pad is a rebound area for jumping, bouncing, and slam dunking (they have basketball hoops, too), similar to Jump Street. Sticky socks are included in the entrance fee to the park. 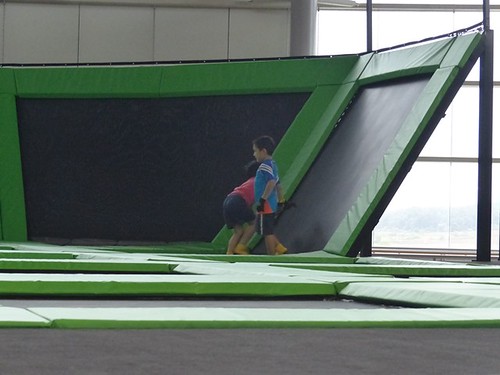 The Low Ropes is the children’s version of the Sky Trail (more about that below). It is basically a rope course for children and is restricted to children 40kg and under. If you have ever seen SkyTrex, the Low Ropes is not unlike the Little Adventure. 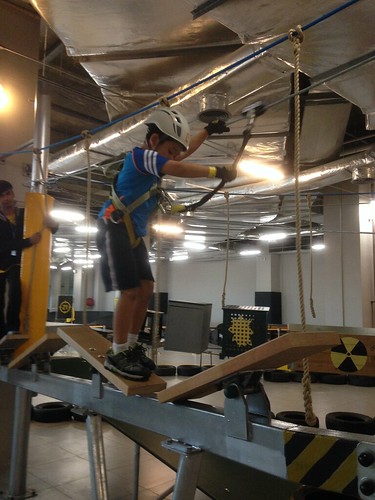 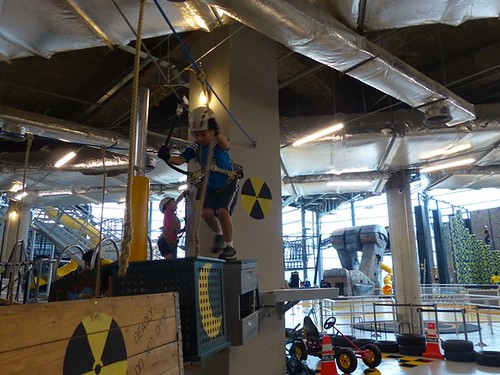 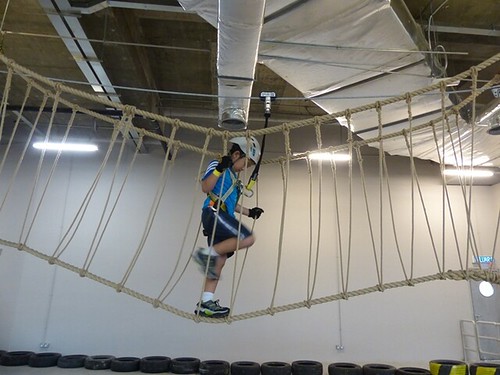 The Sky Trail is essentially an indoor version of SkyTrex. Located in the rafters of District 21, this rope course offers 23 challenges of varying difficulty. I think the height alone presents a challenge for the acrophobic individual because the rope course is higher than the top of the climbing walls at the Power Station.

I’m coming back for this one… Any volunteers to babysit my kids?

The Pump Track looks pretty much like an indoor BMX track. We didn’t get to try this one either because we didn’t have confident bikers.

The Power Station is a series of climbing walls with autobelays. Participants at the Power Station get 20 minutes to try as many challenges as they want before they have to make way for the next group of climbers. We made the mistake of leaving this for last. By the time we got around to it, it was packed. G2 was happy to miss it, but G1 is already planning a return. 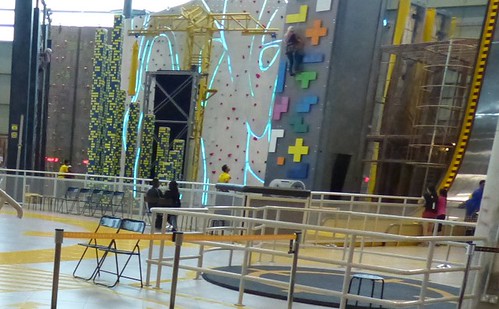 If you look at the photo above of the Power Station, you will see the Free Fall landing pad in the foreground. It wasn’t open until the afternoon and by the time we got back from lunch, the queue line was pretty long already.

A cross between a zip-line and a coaster, the Roller Glider will give you a taste of “flying” through the rafters of District 21. There are a few restrictions to take note of:

This is another one we’ll have to come back for…

A carousel of random animals for the children to ride. In light of the other more exciting adventures to be had at District 21, I guess the carousel didn’t stand a chance because the boys weren’t interested to ride it. Ordinarily, they’re begging for those coin-operated rides at the mall, so I was surprised by the lack of interest.

There was one experience that really stood out for me. I didn’t get his name at the time but I found out from District 21’s Facebook page that he was Mr Richard. I don’t know if I expressed my gratitude enough for the amazing way he handled G2 when he got scared on the Low Ropes…

G2, I have discovered, is Daddy’s boy. I don’t know if you can say that he’s acrophobic because he loves the flying fox and he has no trouble looking down from tall heights, but this visit to District 21 was clear – he doesn’t like stepping onto unsteady surfaces. Despite that, he managed to conquer his fear until he got to this part of the rope course: 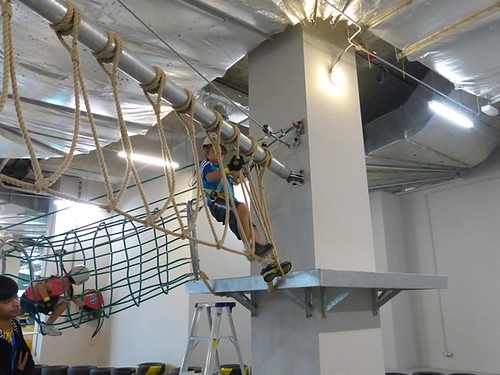 This appears to be the most tricky section for the children because even G1 and his friend had trouble with it. The older boys managed to work their way across with some direction from the staff, but G2 balked. He wouldn’t budge from the platform and started to cry. Meanwhile, a couple of other children were starting to form a queue behind him because they couldn’t proceed until G2 moved forward. I was at a loss as to how to proceed because once you have a crying child – especially one as young as G2 – there’s really no talking sense any more. Then in came Mr Richard, cool and calm, taking the situation in hand. He was wonderful the way he talked to G2 and calmed him down and offered to let him skip ahead to the part of the flying fox. 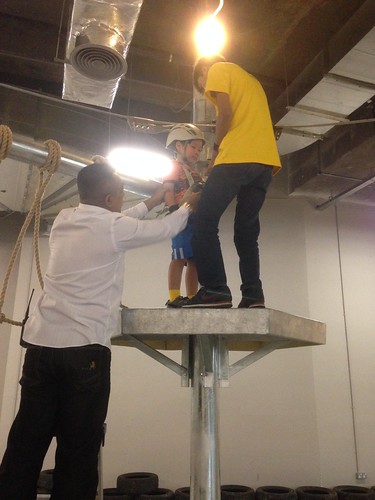 Much to my chagrin, G2 balked at the flying fox as well – perhaps because he was already scared so his threshold for fear was already low. But Mr Richard was cool about that, too. He just helped G2 down and assured him it was okay. So yeah… Mr Richard is awesome!

Void of ‘passive’ rides, the credo of District21 is Fun, Passion, and Participation engaging the entire family to be active. Incorporating 11 adventure attractions, many of which have never been seen in Asia, District21 offers activities for all visitors to get you climbing, jumping, riding, sliding and flying.