“To forget how to dig the earth and to tend the soil is to forget ourselves.” – Mohandas K. Gandhi

There was an article in The HuffPost recently about how we are the last generation of children that played outside. You might argue that this isn’t entirely true – the kids do go outside and they do play outside but I bet many kids won’t have played outside the way we did. I know my boys don’t. They’ve never climbed a tree and spent hours in it in an imaginary world. They’ve never dug for earth worms and seen that they can still survive if you cut them in half (okay my cousin did that, I just watched because creepy crawlies scared the bejeezus). They’ve never played backyard cricket with lemons. They’ve never had water fights with the neighbour’s kids and had to walk meekly back into the house under the furious glare of a mother because all the laundry on the clothesline is drenched.

The richness I achieve comes from Nature, the source of my inspiration. – Claude Monet

But I digress… We know it is important for children to be connected with nature – we know all the benefits of being immersed in nature – and we can’t let it slide away without a fight. So here’s an oldie but a goodie that still retains its appeal after all this time…

Attack of the Killer Plants!

What you will need:

The Mission: Defeat the killer plants! 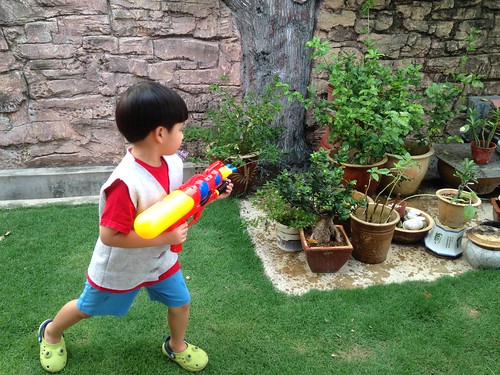 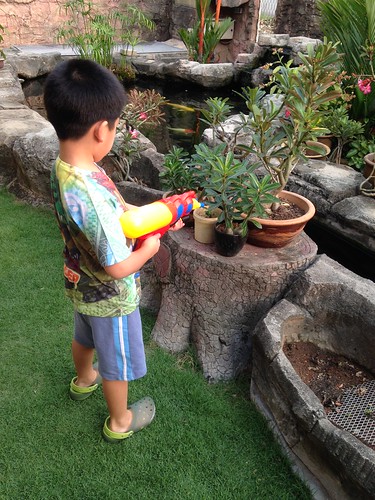 The plants get watered. The kids are outside – they won’t even want to come back into the house after all the plants are watered and it’s time for dinner.

It is only a small step but I reckon it’s a step in the right direction.

“To see a world in a grain of sand,
And a heaven in a wild flower,
Hold infinity in the palm of your hand,
An eternity in an hour.”