Maths Quest is a series of 4 books written by David Glover – research scientist and math and science teacher. I bought them when G1 was very little, thinking they were stories about Math that he would enjoy listening to. I didn’t realise that they contained Math problems that the reader has to solve along the way to find the right path to the end of the story. I shelved them thinking I would take them out again when G1 was older and I’d almost forgotten all about them until today. G1 read the first book – Museum of Mysteries – and he couldn’t put it down until he got through to the end. Now he wants to read the rest…

There are four titles:

How does it work?

It is basically a Math adventure not unlike those “Choose Your Own Adventure” stories where you decide what happens next. The only difference is that your choice will be based on the answers to the math problems provided as part of the story. As you read the story, you will be faced with various puzzles of a mathematical nature that you will need to work out so you will know what page to go to next. If you choose the wrong answer, you will be taken to a page that will give you a clue to rework the problem or it might explain why the answer was incorrect. The correct answer will lead you further along the story line. You keep going until you get to the end of the adventure. 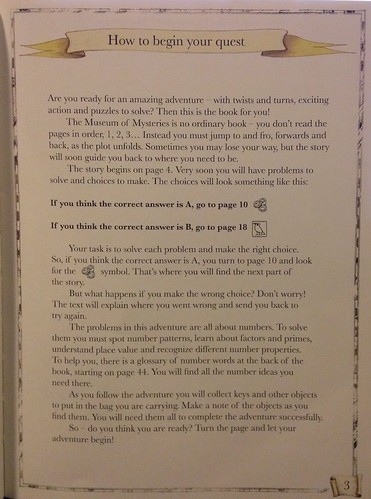 This is an example of one of the math problems in the story: 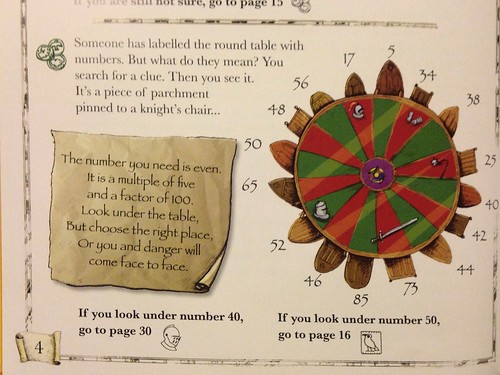 The stories are pretty short so they can be completed in one sitting. Depending on the level of mathematical understanding of your child, you may or may not need to sit alongside your child and talk him through some of the problems. The books are recommended for children age 7 and up.

G1 enjoyed it thoroughly and he’s learning math terminology that he was not familiar with previously. Best of all, he’s doing math willingly!

My only gripe is that the stories are too short and there aren’t enough math problems. Once you get through the story, you pretty much know all the problems so there’s not much point in going through the book again. It would be nice if the stories were longer or if Glover would write more books for this series.

Now that I know G1 is open to books like these, I’ve been on the lookout for similar books. This was one that was along the same line: