A child passes through special times in his life when he easily incorporates a particular ability into his schema if allowed to practice it exhaustively during this time. Maria Montessori referred to it as, “. . . a passing impulse or potency.” These sensitive periods are critical to the child’s self development. He unconsciously knows that the time to learn a specific skill is now. The child’s intensity reflects his need for that particular acquisition in order to live. However, once the period passes, he’ll have to learn the skill with much more difficulty at a subsequent time. – Donohue Shortridge

It used to be a concern for me when G2 appeared disinterested in developing his fine-motor skills. He didn’t want to handle a writing implement – not even to colour or even to scribble, well, not for long anyway. The only thing he would do was Play Doh and Lego so I tried to encourage those activities as much as I could. Perhaps I was needlessly anxious because it finally happened without any nudging or encouragement on my part…

Recently, G2 picked up a pair of scissors (the safety ones for kids, of course) and cut his way through his brother’s Kumon Cutting book. He tirelessly went through page after page after page without any prompting from me whatsoever. I guess he’s found his sensitive period for developing his fine-motor skills… 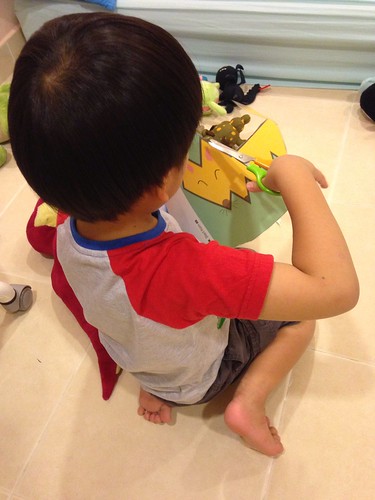