G2 was off school for a week for various reasons so I had to come up with ways to keep him occupied without him climbing up the walls, me losing my sanity, or him zombifying in front of the idiot box.

I used to let him play with play doh on the balcony because it occupies him for hours and I loathe having to clean up the mess after he’s done (of course I never leave him unattended there). One night, Daddy had a nightmare that G2 climbed the balcony railing and that was the end of our play doh sessions on the balcony.

One evening, when I needed to cook, I gave the boys a free reign on the play doh in the spare room. I told them that as long as they kept the play doh off the bed and confined to the room, it was fine. When I walked into the room after dinner was ready, it was a battlefield of play doh because they had been throwing the stuff at each other and hiding under the bed. Whoever said that play doh is easy to clean up is lying, I tell you! I wiped the floor over at least four times and it was still greasy from the play doh! That was the last time they’ve been allowed to play with play doh until recently.

I would have banned play doh forever if I could but how can I when it’s one of the few things my son loves to play for hours without my intervention? So here’s what we’ve been doing instead:

Well, if we’re going to have a bath tub, we might as well put it to good use. I figure that if we’re going to be doing messy stuff then we need to be able to hose down the area after the kids are done. If you live in an apartment, the only place that really works is in the bathroom… 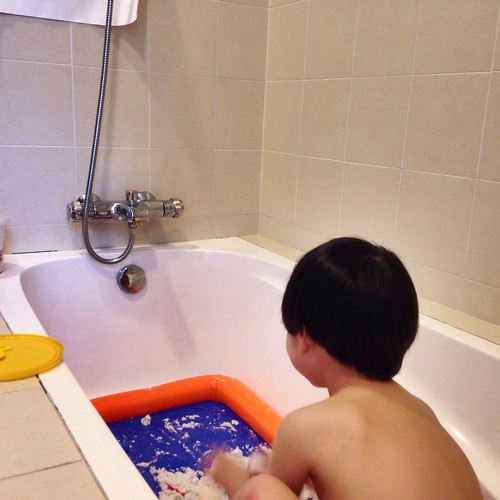 I don’t have many pictures because G2 is stuck on the idea that if he’s in the bath tub, he’s got to take off all his clothes and I need to preserve his modesty. So here are some of the things we’ve been doing in the bath tub:

I figured that if they’re going to make a mess anyway, the least I can do is give them a place where they can knock themselves out without me getting narky when I severely underestimate just how much mess they are capable of creating.