…we should always be striving to be better. And I have really lapsed in this area…

Children see what we do more than they hear what we say, so I’ve decided it’s about time I stepped up my game. Instead of having the computer as my only friend and hobby – and wondering why my boys keep badgering me for the iPad – I’ve started a few new hobbies.

“Music is the medicine of the mind” – John A Logan 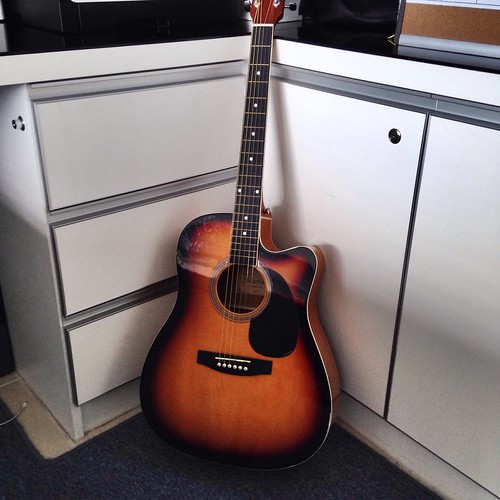 Well, it’s actually a lot harder than it looks. So far, I’ve only learned 5 chords but making a smooth transition between the chords is really, really hard. And my fingers hurt. But I must persevere and demonstrate some commitment… ask me again in 1 month how I’m going.

Even though learning music is like learning another language, I figure it doesn’t really count since I sort of already know it. Besides, after being mono-lingual for three decades, I think it’s about time I do something about. Ideally, I really ought to learn my own mother tongue but there aren’t really too many programs that teach you Hokkien so I went with the most practical language that I’ll be needing later in the year – Japanese.

I’ve been using Eurotalk to learn the basics of conversation and Memrise to learn how to recognise the characters. I think I’m making more headway with this than I am with the guitar. I have memorised the basic emergency words and I can recognise the vowels and the “k” and “s” sounds. Ask me again in one month how I’m going…

Aside from my other motivations for meditating – improving brain function and memory – I will be the model of zen. No more will the boys rile me up with their incessant bickering because I will be as cool as water flowing on the rocks. It seems hypocritical to be telling them to cool off when they’re angry and giving in to my own anger whenever it’s convenient – monkey see, monkey do, right?

I’m also hoping that the mindfulness training will not only rub off on the boys through example, but that it will help me learn to be more “present” as well. Honestly, this “Mom” brain business is really getting out of hand. I know I have always been a bit absentminded but I couldn’t have been this bad. They say that the brain shrinks a little during pregnancy (which is why we suffer from the “Mom” brain) but that it returns to normal after. Well, it’s over four years since I had G2 so my brain should be back – but it’s not.

My new theory is that our increasing multitasking habits are making it worse. For example, one morning while I was brushing my teeth I remembered that I needed to pack G1’s training bag and told myself I should do it after I finished brushing my teeth. After I finished brushing my teeth, I shooed the boys out of the house and into the car and drove off to school. I only remembered later in the car that I’d forgotten his training bag. I seem to be doing that a lot lately – remembering stuff at the wrong time, only to forget it when the time is right. Based on the memory tests I’ve been working on, I don’t have a bad memory – so why don’t I remember things when they matter? So let’s see if we’re a little more on the ball after a month of this…

Since we’re already attempting to meditate, yoga seemed like the natural extension with other health benefits to boot. Somehow, my body remembers this being easier than it feels now so we’re taking it easy – nothing ambitious at all, just three 20 minute sessions a week.