How to Teach Your Baby to Swim is written by Douglas Doman. 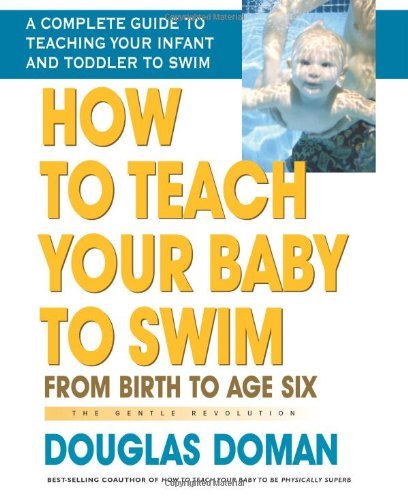 I had all the best intentions to teach Gareth to swim from as early as possible.  I even bought him the special neck float.  Up until recently, it was another one of those activities that I really wanted to do with the boys but could never find the time to get serious about it.  So this is me getting serious.  I went out and bought the book by Douglas Doman.

I scanned the chapter headings of the book in the store and thought it would be a handy book to get because it is divided into sections to help you teach your child to swim from birth to age six.  I had assumed that meant that you could teach a child how to swim using the methods described as long as he is under six years old.  Unfortunately, there is a bit of continuity between the chapters.  Each higher age group builds upon skills learned earlier so if your child is just starting out, it means having to start from scratch.  This works fine for an older child who is able to take instruction, but it gets a little tricky with a child between 6 and 12 months old, like Gareth.

As I mentioned in an earlier post, babies have a dive reflex so that they do not inhale water when they are beneath the surface.  This reflex is present anywhere from birth up to one year.  Gareth, unfortunately, has started to choke on occasion when his head goes under so I get nervous about trying to teach him to dive.  Although he has been under a couple of times and does not appear phased by it, I find it difficult to intentionally dunk him under the water to encourage him to hold his breath.

Nevertheless, it hasn’t stopped me trying to teach the boys how to swim…

Some of the things I’ve been working on with them:

The following are very brief notes from the book “How to Teach Your Baby to Swim”.  I seriously recommend getting a copy of the book and reading it yourself before attempting this with your children.  Alternatively, try to attend a professional lesson on teaching babies how to swim.  I’m sure I don’t need to tell you, but as with all things that involve water and children – safety first.

As with all early learning activities, make sure there are lots of cuddles, laughter and fun in the activity.  The first lot of activities are done with newborns, but you can also do them with an older child.  With newborns, you can begin your program in a bathtub.  Unfortunately, we don’t have a bathtub big enough so we’ve got to get to a pool to practice.

Here the summary of things your baby should be able to do by the time you are through with this segment:

It is important to make sure that your baby is well rested and fed before scheduling a swimming session.  Also remember to bestow lots of hugs and kisses throughout the session.