I confess that I was never always against the idea of corporal punishment.  At one stage, I even believed that if you “spare the rod”, you “spoil the child”.  My only defence lies in the fact that I believed it back in days before I became a parent.  I used to think that juvenile delinquents existed because their parents failed to discipline (read: smack, because back then discipline to me meant smacking, spanking, hitting or whatever name it goes by under the umbrella term of corporal punishment) them adequately when they were younger, and that was why I was all for corporal punishment.

And then I became a mother.

And the maternal instincts kicked in.

Okay, okay, perhaps it started a little before that.  I was pregnant and the dog was misbehaving and while I was threatening to smack him for being “bad” that was about as far as I could go.  I couldn’t bring myself to inflict harm upon him.

Even as I look at my son, I don’t think I could lay a hand upon him and justify it under the term of “discipline”.

I decided “to each his own”.  Corporal punishment may be the way for some parents but it wasn’t going to be for me.

That was when I started reading to educate myself on what other options existed besides corporal punishment.  How else could I raise a well-behaved, confident and socially well-adjusted child?

Why is corporal punishment so damaging to a child?

Because corporal punishment causes stress in a child that is no different to the stress a child experiences when being bullied or suffering from child abuse.  Brain scans show structural and biochemical changes that affect social behaviour.

Cell death in the anterior cingulate gyrus affects a child’s ability to moderate fear and to empathise.  Changes in the brain’s pathways affect a child’s ability to manage stress and be more prone to being impulsive, aggressive and/or anxious.  Long term changes to the adrenaline systems in the brain affect the ability to think clearly.  Impairment in the brain stem has been linked to ADHD, depression and impaired attention.  It also leads to more aggression and irritability.

Other changes to the brain have also been observed:

A common argument for the corporal punishment camp is one that goes something along the lines of, “I was spanked as a child and I turned out okay.”

A couple of other arguments stem from this point as well.  Firstly, what is okay?  Could it be that if we weren’t smacked we might have more deeper and meaningful friendships?  Better relationships?  Lasting marriages?  Feel less depressed?  Perform better at work?  Have a better outlook and attitude towards life?

Secondly, children who have been hit by misguided well-intentioned parents are later able to reach a well adjusted adulthood because of the love, nurturance and appropriate limit-setting not because of the physical violence they received.

Jordan Riak cites an excellent example that articulates the fallacy of this belief rather aptly (incidentally, each and every one of these examples applies to my own childhood, too):

Let’s test the I-turned-out-okay argument by examining a few real-life examples from my own childhood. See if they apply to you.

Was my family wise or just lucky? Today, we don’t do those things anymore. We don’t take such risks, and we don’t expose our children to such risks – not if we know the facts.

Quite possibly, one of the uncomfortable notions about criticising corporal punishment is that many of us (at least in the circle of people that I know) were smacked at some stage when we were children.  The idea that our parents did wrong against us can be a rather uncomfortable one to face.  I’m not faulting the way we were raised by our parents.  They did what they felt was right at the time because they lacked the awareness of the possible side effects.  All the examples listed above are other ways our parents did “wrong” against us but they were accepted practices in their day.

I could cite a few more…

When I was a kid, I was treated by dentists who never wore gloves.  Would you allow a dentist to put her hands into your mouth now without gloves?

As a child, I was weaned by my mother because that was the recommended practice of the day. I don’t blame my mother for it, nor do I complain that I am intellectually weaker than my peers who were lucky enough to be breastfed as a result.

The Efficacy of Corporal Punishment 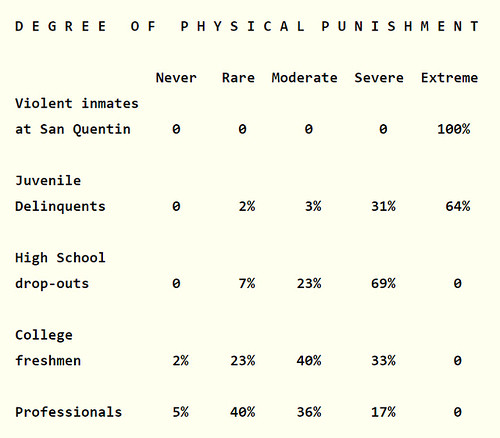 From: The Influence of Corporal Punishment on Crime
By Adah Maurer, Ph.D. and James S. Wallerstein (1987)

You will find that adults who were hit as kids, while believing that it did them “no harm”, can seldom articulate any way in which it helped them. Let’s be honest, if you were smacked as a kid and you behaved after that, why did you behave?  Was it because you knew it was wrong?  Because you were afraid of getting smacked again?  Or because you didn’t want to disappoint your parents?

Exactly what are the lessons learned from being hit?  Often it leads to bullying and the acceptance that it is okay to hit others.  What happened to the moral of the story?  Your child might behave in front of you but how will you know what goes on behind your back?  Discipline should be about raising morally-aware children with a social conscience, and not creating fear-inspired behaviours in a child that don’t last once the child is out of sight.

There are Other Ways to Discipline

It also seems to me that a common misconception is that if I choose not to discipline my child by smacking him, I’m choosing not to discipline him at all (forgive me if I’m making a generalisation here as this is based on a comment made on a recent post I wrote about Choosing a Parenting Style).  Perhaps such thoughts are only limited to those near-sighted enough to believe that the only way to discipline a child is through violence.

There are other ways to discipline a child.  They are generally more time consuming and they also require more effort.  Let’s face it – it’s definitely a lot easier to just yell at your child or smack him for misbehaving.  It doesn’t require much thought and I’m sure the action alone will help you let off some steam from the anger buttons your child has just pushed.

This is a long and lengthy topic, but if you’re convinced that non-violent discipline is the way to go, then might I recommend these resources:

Or at the very least read the evidence or dig deeper yourself:

9 thoughts on “The Stand Against Corporal Punishment”