Here’s something fun one to try out with your baby. Discover what your baby’s personality is by answering the following twenty multiple choice questions, from Secrets of the Baby Whisperer by Tracy Hogg. 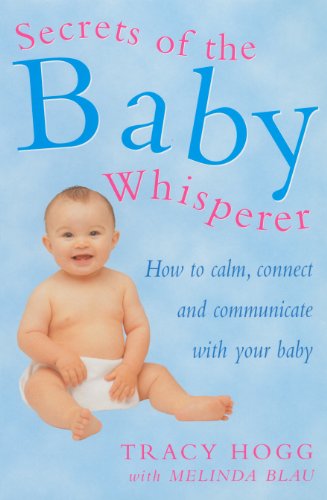 For each of the following questions, pick the best answer – in other words, the statement that describes your child most of the time.

1. My baby
A. rarely cries
B. cries only when she’s hungry, tired, or overstimulated.
C. cries for no apparent reason.
D. cries very loudly, and if I don’t attend to it, she quickly gets into a rage cry.
E. cries a lot of the time.

2. When it’s time for him to go to sleep, my baby
A. lies peacefully in his crib and drifts off to sleep.
B. generally falls asleep easily within twenty minutes.
C. fusses a bit and seems to be drifting off, but then he keeps waking up.
D. is very restless and often needs to be swaddled or held.
E. cries a lot and seems to resent being put down.

3. When she wakes up in the morning, my baby
A. rarely cries – she plays in her crib until I come in.
B. coos and looks around.
C. needs immediate attention or she starts crying.
D. screams.
E. whimpers.

4. My baby smiles
A. at everything and everybody.
B. when prompted.
C. when prompted but sometimes starts to cry within minutes of smiling.
D. a lot and is also very vocal, tending to make very loud baby noises.
E. only under the right circumstances.

5. When I take my baby on any kind of outing, he
A. is extremely portable.
B. is okay as long as where I take him isn’t too busy or unfamiliar.
C. fusses a great deal.
D. is very demanding of my attention.
E. doesn’t like to be handled a lot.

6. When confronted by a friendly stranger cooing at her, my baby
A. immediately smiles.
B. takes a moment and then usually smiles fairly quickly.
C. is likely to cry at first, unless the stranger can win her over.
D. gets very excited.
E. hardly ever smiles.

7. When there’s a loud noise, like a dog barking or a slamming door, my baby
A. is never rattled.
B. notices it but isn’t bothered.
C. flinches visibly and often starts to cry.
D. gets loud himself.
E. starts to cry.

8. When I first gave my baby a bath
A. she took to the water like a duck.
B. she was a little surprised at the sensation, but liked it almost immediately.
C. she was very sensitive – she shook a little and seemed afraid.
D. she was wild – flailing about and splashing.
E. she hated it and cried.

10. My baby makes loud, aggressive noises
A. once in a while.
B. only when she’s playing and is highly stimulated.
C. hardly ever.
D. often.
E. when she’s angry.

11. When I change my baby’s diaper, bathe him, or dress him
A. he always takes it in stride.
B. he is okay if I do it slowly and let him know what I’m doing.
C. is often cranky, as if he can’t stand being naked.
D. wriggles a lot and tries to pull everything off the changing table.
E. he hates it – dressing is always a battle.

12. If I suddenly bring my baby into a bright light, like sunlight or fluorescent light, she
A. takes it in stride.
B. can sometimes act startled.
C. blinks excessively or tries to turn her head away from the light.
D. becomes overstimulated.
E. acts annoyed.

13a. If you bottle-feed: When I feed my baby, she
A. Always sucks properly, pay attention, and usually eats within twenty minutes.
B. is a little erratic during growth spurts but generally a good eater.
C. is very squirmy and takes a long time to finish the bottle.
D. grabs at the bottle aggressively and tends to overeat.
E. is often cranky and feedings take a long time.

13b. If you breastfeed: When I feed my baby, he
A. latches on immediately – it was a snap right from day one.
B. took a day or two to latch on properly, but now we do fine.
C. always wants to suckle but goes on and off the breast, as if he’s forgotten how to nurse.
D. eats well as long as I hold him the way he wants me to.
E. gets very annoyed and restless, as if I don’t have enough milk for him.

14. The comment that best describes the communication between my baby and me is
A. she always lets me know exactly what she needs.
B. most of the time her cues are easy to read.
C. she confuses me; sometimes she even cries at me.
D. she asserts her likes and dislikes very clearly and often loudly.
E. she usually gets my attention with loud, angry crying.

15. When we go to a family gather and lots of people want to hold him, my baby
A. is very adaptable.
B. is somewhat selective about whom he’ll go to.
C. cries easily if too many people hold him.
D. might cry or even try to lurch out of someone’s arms if he doesn’t feel comfortable.
E. refuses anyone’s arms except Mummy’s or Daddy’s.

16. When we come home from any kind of outing, my baby
A. settles in easily and immediately.
B. takes a few minutes to get acclimated.
C. tends to be very fussy.
D. is often overstimulated and hard to calm down.
E. acts angry and miserable.

17. My baby
A. can amuse herself for long periods by staring at anything, even the slats in the crib.
B. can play on her own for around fifteen minutes.
C. finds it hard to be amused in unfamiliar surroundings.
D. needs a lot of stimulation to be amused.
E. is not easily amused by anything.

18. The most noticeable thing about my baby is how
A. incredibly well-behaved and easy he is.
B. much he is developing precisely on schedule – just like the books said he would.
C. sensitive he is to everything.
D. aggressive he is.
E. grouchy he can be.

19. My baby seems to
A. feel utterly safe in her own bed (crib).
B. prefer her bed most of the time.
C. feel insecure in her bed.
D. act feisty, like her bed is a prison.
E. resent being put down into her bed.

20. A comment that best describes my baby is that
A. you hardly know there’s a baby in the house – he’s good as gold.
B. he’s easy to handle, easy to predict.
C. he’s a very delicate little thing.
D. I fear when he begins crawling, he’s going to get into everything.
E. he’s an “old soul” – he acts like he’s been here before.

To score the self-test above, write A, B, C, D, and E on a piece of paper and next to each one, count how many times you’ve used each letter, which denotes a corresponding type.

What it all means…

Angel babies are good as gold. They are mellow, eternally smiling, and consistently undemanding. Their cues are easy to read. They are not bothered by new surroundings and they are extremely portable. They feed, play, and sleep easily, and usually don’t cry when they wake up. They easily amuse themselves when they wake up in the morning. They can often calm themselves down. Even when they get overtired, it is easy to settle them down again.

Textbook babies are predictable and fairly easy to handle. They do everything on cue so there are usually few surprises with them. They reach all the milestones right on schedule – sleep through the night by three months, roll over by five, sit up by six. They’ll have growth spurts like clockwork. They can play on their own for short periods (about 15 minutes) as early as one week old. They’ll coo a lot and look around. They smile when someone smiles at them. Though they have normal cranky periods, they are easy to calm and it isn’t hard to get them to sleep either.

Touchy babies are ultra-sensitive. To them, the world is an endless array of sensory challenges. They flinch at the sound of a motorcycle revving outside their window, the TV blaring, a dog barking in the house next door. They blink or turn their heads away from bright lights. They sometimes cry for no apparent reason, even at their mothers. They often get fussy after a number of people have held them, or after outings. They’ll play on their own for a few minutes, but needs the reassurance that someone they know well is close by. They like to suck a lot and this cue may easily be misread for hunger. They nurse erratically, sometimes acting as though they have forgotten how. They have difficulty falling asleep during nap times or at night. They easily get off schedule – an extra-long nap, a skipped meal, an unexpected visitor, a trip, a change in formula, etc. can throw them out of the loop. To calm them, you have to recreate the womb – swaddle, snuggle them to your shoulder, whisper a rhythmic shushing sound close to their ear, and pat their back gently. The quicker you learn their cues and their cries, the simpler life is. They love structure and predictability.

Spirited babies emerge from the womb knowing what they like and don’t like and they never hesitate to let you know it. They are very vocal and even seem aggressive at times. They scream for Mum or Dad when they wake in the morning. They hate lying in their own pee or poop and will vocalise their discomfort. They babble a lot and loudly. Their body language tends to be a bit jerky. They often need swaddling to get to sleep because their flailing arms and legs keep them up and overstimulated. If they start crying and the cycle is not interrupted, they reach the point of no return. Their crying will lead to more crying until they reach a fever pitch of rage. They’ll also notice other babies before those babies notice them. They’ll grab at their bottle at an early age and as soon as they’re old enough to develop a good, firm grasp, they’ll grab other babies’ toys as well.

Grumpy babies act like they’ve been here before and they are not at all happy to be back. They’re mad at the world and they let you know it. They whimper every morning, don’t smile much during the day and fuss their way to sleep every night. Their mothers have a lot of trouble keeping baby-sitters. They hate baths at first and every time someone tries to change or dress them, they get fidgety and irritable. Feeding is difficult because of their cranky disposition. Calming grumpy babies takes a patient Mum or Dad because they get very angry and their cries are particularly loud and long. If they reach a major meltdown, gently sway them front to back.

For information on how to handle your Angel/Textbook/Sensitive/Spirited/Grumpy baby, check out Secrets of the Baby Whisperer by Tracy Hogg.

10 thoughts on “What’s Your Baby’s Personality?”